The Lyons Inquiry into Local Government was established in July 2004 following the Balance of Funding Review (BoF). Sir Michael Lyons was appointed jointly by the Chancellor of the Exchequer and the Deputy Prime Minister to analyse the ways in which local councils are funded and how the system might be improved.

He was originally asked to report by December 2005, but the remit of the Inquiry was extended and the report Place-shaping: a shared ambition for the future of local government was not published until 21 March 2007. 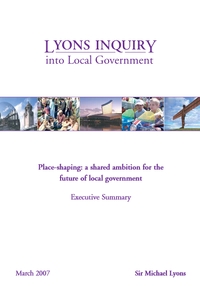 Sir Michael Lyons summarised that the main responsibilities of local government as:

He then identified a number of important challenges:

The report itself focussed on:

According to Sir Michael, central government should:

The recommendations of the report included:

The report also promoted the concept of ‘place-shaping’ within local government which it described as, ‘the creative use of powers and influence to promote the general well-being of a community and its citizens’. It suggested that this includes a number of components:

Sir Michael said, "Local government's place-shaping role - using powers and influence creatively to promote the well-being of a community and its citizens - is crucial to help improve satisfaction and prosperity through greater local choice and flexibility… I call for a new partnership between central and local government. This needs to be based on changes in behaviours from all tiers of government to achieve a stronger relationship - creating a shared ambition for the future.

"Central government needs to leave more room for local discretion and recognise the value of local choice; while local government needs to strengthen its own confidence and capability, engage more effectively with local people, make best use of existing powers, and stop asking for central direction.”

Other reports published by Sir Michael include:

Retrieved from "https://www.designingbuildings.co.uk/wiki/Lyons_Inquiry"
Create an article