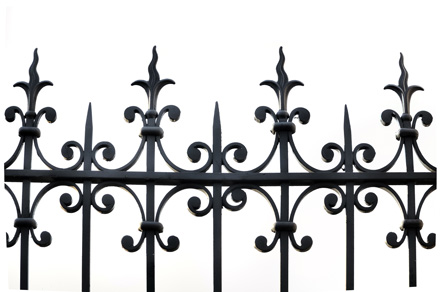 Iron is the chemical element most commonly found on Earth by mass, forming much of the Earth’s outer and inner core. On the Periodic Table it has the symbol ‘Fe’ and atomic number 26. Pure iron is relatively soft but it is significantly hardened and strengthened during the smelting process by impurities such as carbon.

The term 'ironwork' refers to any architectural component or feature of a building, principally used for decorative purposes, that is made of iron.

While the use of iron for building purposes dates back to early civilisations, its use for decoration became more widespread between the 16th and 19th centuries. Ironwork began to be used during the medieval period for defensive purposes, but became more ornate and decorative in the Baroque and Rococo architectural periods, particularly for:

The two main types of ironwork are:

Wrought iron is a very low carbon metal made by intensive hand work using small scale production methods. The term 'cast iron' refers to a range of iron-carbon alloys, with a carbon content that is typically between 2 and 4%. Cast iron is manufactured by re-melting pig iron along with quantities of limestone, silicon and carbon (and sometimes scrap steel).

The term ‘ironworks’ refers to a place where iron is smelted or where iron products are manufactured.

NB the term ironwork can also be used to refer to items such as manhole covers, drain covers and so on used in the construction of highways.

Retrieved from "https://www.designingbuildings.co.uk/wiki/Ironwork_in_buildings"
Create an article