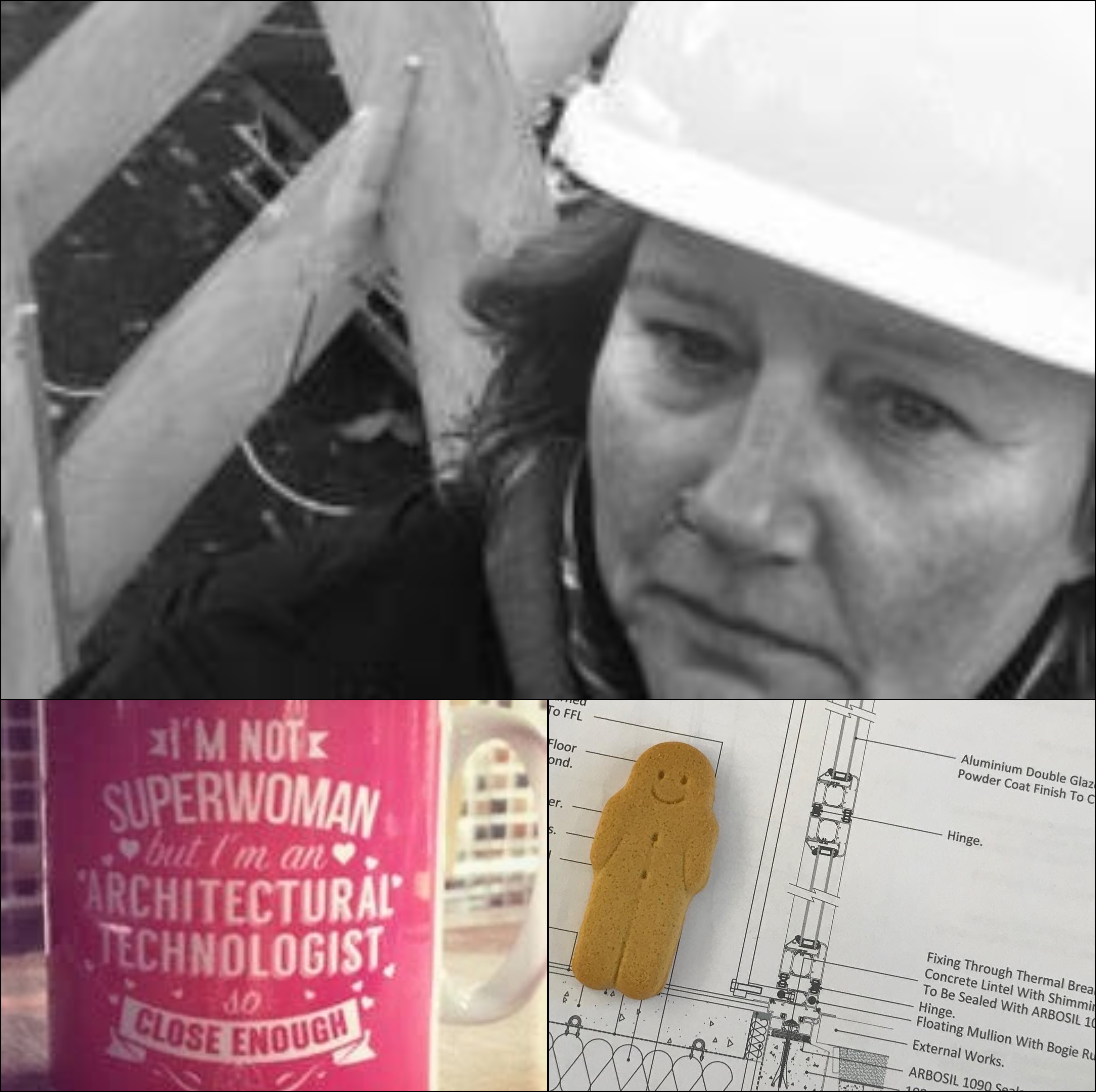 As a working mother, she has become adept at setting priorities and directing her attention on the things that matter most to her - particularly as they relate to the future she anticipates for her children, her students, the AT profession and the built environment.

Vanner envisions significant shifts in education as it relates to climate change. As a parent, she is shocked that climate crisis education is almost over for some children by the time they reach the age of 13. She also notes the desperate need for an acceleration in the adoption of technology in the built environment. She says, “We’re just behind butchers - we’re so far behind.”

Designing Buildings Wiki caught up with Vanner for a virtual discussion that revealed her views on AT, the built environment and much more.

I’m a working mum, so my day starts off scooting children out of the house and making sure they have everything. Then I have to very quickly flip into work mode. I spend the first hour or so thinking about social media and doing a bit of general reading of things like Designing Buildings Wiki. This is always a good start in the morning, particularly the headlines and just a couple of articles, because they might not be something that I touch on that day, but often I will be able to join the dots up somewhere else in that week.

I spend a lot of my time teaching in the studio. We have a studio-based approach to teaching AT and are quite hands-on. We have a little mantra for the course which is “practical creativity," and I expect people to get their hands dirty. So we make things, we test things, we break things, we set fire to things (we like setting fire to things) to prove points. We make lots of models.

Although we’re very passionate about the studio as a learning space, we also enjoy going outside the studio. We have a little learning exercise called “learning from the every day to ensure that the every day is well designed." We go out to look at buildings, work out what the problems are and where the problems have come from. Are these problems that come from the original design? Or did they come from how the building has been adapted for different uses? How would we have done it differently?

We’re also quite research focused in what we do. We are trying to continuously solve the problems that we are facing. There is an element of a practical part of it, but there is also quite an academic point of view.

Dissertations that the students write are held in high regard. In 2018, one of my students won the CIAT best dissertation award for his work, which was very academic and very practical. He went into the labs and tested how you might restore timber in historic buildings (for instance, the best kinds of jointings you might use to do that).

I always describe myself as being absorbed by UCLAN. I was a student there and graduated from the MSC in Conservation and Adaptation. I then started doing a couple of days teaching while I was also in practice as an architect. My teaching time became more and more while the practice time became less and less. Then it flipped, and now I’m full time at UCLAN.

Every year when the students graduate is a moment of joy and sadness. The studio goes from being a very busy place with lots of students worrying about dissertations and exams to them submitting their work. Then we have a wonderful degree show. They’re normally on a Thursday. On the following Monday morning, I will walk down the corridor and there is just quietness.

I often think that’s what it’s going to be like when my children leave home. There will be this empty nest. I’ll know I’ve done the right thing, but it’s still very sad that they are no longer sort of under my wing.

I try to keep in touch with my alumni, so every time they have a success (for instance, they get promoted, they ask me for a reference because they’re going for a new job or they’re looking to do a Master’s somewhere), that gives me a little moment of joy as well. I think, “Yep! They’re continuing learning, they’re continuing their journey. They’re becoming architectural technologists. They will continue to spread the word.”

I want to encourage more females into the sector. We need more females. I’ve given up counting the times I walk into a meeting and I’m the only female or I’m brought into a meeting because I’m the only female. There is a lot of work that we need to do on that. It’s so important that we support the next generation to encourage them to use their voice and give them the confidence and the ability to question and to say things when things aren’t right.

I’ve had a fabulous career as an AT. My profession has fed me, employed me, kept me out of mischief and given me a career that allowed me to diversify when I’ve needed or wanted to. I have travelled. I have met some amazing people. I’ve been involved in some great projects - from working on a 42 hectare site in Germany to working on a tiny conservation project in the Lake District.

There are several events of note.

As someone who has had the opportunity to work abroad, Brexit for me was a very painful experience. It really hit home on the 6th or 7th of January 2021 when I read an article that my professional qualifications were no longer going to be recognised in Europe. Literally, before Christmas 2020 (because I still do a little bit of work in Berlin and things like that), I could function as one person and now I can’t.

I was one of those people who went to work in Germany after the fall of the Berlin wall, because we had a recession here. I was able to travel and work with the qualifications that I had. That was a wonderful thing. The next generation is not going to have that same opportunity.

I’m very keen on how technology is going to have an impact on the built environment. As ATs, we love our technology! Technology can go off into areas that aren’t even related (such as nanotechnology - looking at what the spiders’ webs can do).

But within the built environment, we need to get much better in the uptake of technology. Think about the materials that we are using; we’re using bricks almost the same way that Romans used them. We need to stop talking about construction and more about assembly, offsite fabrication and new materials.

Health and safety has always been a huge part of who I am and what I am, and I question why we don’t use that almost as a design parameter in the first place.

For me, there is the failure to listen to the concerns of the end user. At the end of the day, we design buildings for people, and if we’re not engaging with the end users, then why are we designing buildings in the first place?

I truly believe that we have it within our skillset, as ATs, to help with some of the issues that we are facing with climate change. For instance, how we heat a building can address fuel poverty. There is an issue with how buildings are put together, which is where I go back to the conversation - instead of construction it should be assembly.

There’s a wonderful group called Teach the Future, and they are advocating that we completely revisit the curriculum by having climate change and the ecological crisis as the overarching subject. Everything else hangs underneath that. I think this is a fabulous aspiration. Who knows whether we’ll ever get there, because it breaks down the established siloes of how we educate. Their other aspiration is that every school is retrofit so the buildings become an educational tool in themselves.

Designing Buildings Wiki is the place I go to.

We also use social media a great deal. We have done so for dissertations in the past so that we are actually tapping into the most current issues. We use social media to signpost one another to articles we’ve read or things we’ve seen.

We did a bit of a book club in 2020/2021, and it wasn’t so much about the students having to READ these books, but they had to be aware of them. They were the sort of “10 books you should have on your shelf” recommendations.

Trade bodies and organisations are also helpful. There are three that I am involved with:

There are no dumb questions.

When we do reviews, my students say, “what will you be asking?” and I tell them I will be asking why. Why have you done that? Why have you chosen that material? Why have you put that there? And you need to be able to respond to that. You can’t just say it’s because you like it, you need to justify it. The answer is very practical and evidence based.

From our practical creativity tagline, we also talk about failure. It is okay to make a mistake and get something wrong. The problem is if you make that mistake again, you clearly haven’t learned from it the first time. Make the mistake, and then do the learning from it.

This article is based on an interview with Ann Vanner conducted on 25 June 2021. Vanner can be reached via email or through social media (on LinkedIn or Twitter).

To be interviewed for Designing Buildings Wiki, please send the editor an email.

Retrieved from "https://www.designingbuildings.co.uk/wiki/Interview_with_Ann_Vanner"
Create an article