How drones can improve safety and productivity

Drones are increasingly being used for condition surveys of infrastructure and plant. According to new research by PwC, the 'explosion' of drone use could save construction companies billions by 2030.

Head of Digital at Balfour Beatty, Victor Snook discusses how drones are helping to improve both safety and productivity. 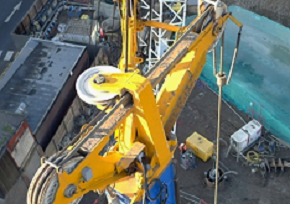 The top 2 causes of deaths at work in the UK for the years 2016/17 were being struck by a moving vehicle (31 fatalities) and falling from height (25 fatalities). The construction industry alone suffered 30 fatalities, which is the highest of any single industry (ref. HSE, 2018).

Clearly the construction and infrastructure sector needs to implement innovative ideas and technologies to reduce or even remove entirely the risks to its workforce.

With the considerable health and safety risks facing construction staff while working at height – particularly when conducting condition surveys, Balfour Beatty looked at how this risk could be reduced with the implementation of new technologies.

It resulted in introducing the use of unmanned aerial vehicles - drones -with an ability to take high definition photographs and video footage and be operated in a multitude of environments (subject to compliance with Civil Aviation Authority regulations).

During any construction activity conducted on busy roads the interaction of workers and traffic always adds additional risk. The introduction of drones to survey the condition of infrastructure items such as carriageways and bridges has brought many benefits.

In addition to causing less disruption to traffic, the use of survey drones has resulted in inspections being carried out in much shorter timescales and importantly, much more safely as the necessity for a human presence is minimised.

With a skilled drone pilot, the images obtained are highly detailed and provide a valuable source of data for both pre- and post-condition surveys. Having this level of information also enables a better understanding of the work, particularly where access is difficult to achieve. Further risk is removed when drones are used over water.

The use of drones has also been extended to checking the condition of large construction plant such as cranes and piling rigs. The photograph above shows the cat head and mast of a Casagrande B360 piling rig taken while the rig operator was on a break. The drone pictures allow nuts and pins to be checked as well as the general condition of the plant.

Advantages of using use of drones to inspect plant includes the ability to inspect cranes and rigs during downtime without the need to lower them to ground level. In the space of approximately 10 minutes, sufficient pictures can be taken along a crane jib or cat head to carry out an inspection and each picture can be zoomed to check detail.

No work at height is required and a library of photographs for rig inspections can be assembled to indicate deterioration.

This article was originally published here by ICE on 21 May 2018. It was written by Victor Snook, Head of Digital at Balfour Beatty.

Retrieved from "https://www.designingbuildings.co.uk/wiki/How_drones_can_improve_safety_and_productivity"
Create an article