The specific challenges for highway engineers may vary from country to country, but some similarities are emerging, as seen from projects in the UK, the Netherlands and China. Jeroen Rijsdijk, Arcadis Netherlands, discusses how engineers can adapt to these complex interdependencies. 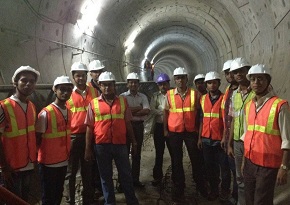 In order to provide the infrastructure we already have, civil engineers have had to become increasingly specialised over the past 200 years. Wherever we are in the world, engineers need to change. This global change is not rocket science but it is necessary. The following three examples of highways engineering– from the UK, the Netherlands, and China – show why.

For trunk roads, the engineering ‘bible’ has been the 'Highways England Design Manual for Roads and Bridges' (DMRB) which has developed to ensure engineering excellence and consistency. Quite rightly, the emphasis is on safety and so drainage is designed to get surface water off the pavement and away as quickly as possible.

Where sustainable drainage is required it has to sit outside the highway. For smaller roads, the responsibility falls under the local Highway Authority who tend to follow the DMRB. If the road is to be adopted, this sets up a potential conflict between the highway requirement for drainage and the surface water management approach taken for the site as a whole.

The use of local roads as exceedance routes requires detailed discussion between all the stakeholders at an early stage. Examples of where this can be circumvented are largely in urban retrofit schemes where the surface water management is the reason for the introduction of sustainable drainage (SuDS) features and the highways engineers are involved from the start.

There is evidence from a case study of a scheme in Llanelli, Wales, that the barriers to cross functional design in SuDS can be overcome with the right motivation. There was an innovative agreement between the County Council and the water authority (Dwr Cymru Welsh Water) to carry out the work and then hand the elements that were part of the highways drainage back to the highways authority.

This process is being translated across other surface water management schemes in Wales.

The expertise of Dutch engineering in including floodwater and storm water factors throughout infrastructure design is admired globally. However, even engineering teams in Holland are still learning about the need to include water specialists right from the start of road and spatial design.

For example, Amsterdam ring road west was widened by adding an additional underground tunnel to it and doubling the motorway in capacity and also in asphalt surface. The project appeared to be progressing well, the design team convinced that they had enough understanding of the drainage and water management based on the road design guidelines, which also give direction on drainage and water management.

A water expert had already detected that the official guidelines were not able to deal with such a complex environment as the centre of a big city, but the road engineers were not convinced that they also needed a water expert team in the design group.

It took two months of insistent persuading on the part of the water expert before their recommendations were accepted by everyone. The practical ramifications were considerable – the alignment of the motorway expansion was completely changed as a result – but easily addressed by including a team of hydrologists and hydraulic engineers in the design team right from the start.

However, this was only possible once the lead highways engineer understood that this need was not the result of a lack of professionalism on their part, but realising that the engineering standard for motorways is not sufficient for drainage and water management design in a complex urban environment.

[edit] Collaboration between specialists in China

The unintended consequence of this is that there is little soil left for infiltration and storage. This makes it hard to deal with the objectives of the Chinese climate adaptation program ‘Sponge City’ in which these areas should become more climate resilient.

As rainfall patterns change, and intense precipitation becomes a lot more frequent the developments and infrastructure are at risk by not being able to deal with these more extreme conditions when working with old ‘traditional’ design solutions. The awareness that water expertise should be more integrated with road and spatial design is just beginning to sink in.

These examples show how three different industrialised countries are facing similar challenges in highways and drainage design. At heart, these issues are not about highways engineering per se, but about complex interdependencies and professional learning.

These are two of the five axioms of systems thinking: Axiom 3 ‘seeing complex interdependencies’ and Axiom 5 ‘the importance of evolutionary learning’.

More detail about all systems thinking axioms can be found here. Although systems thinking can sometimes sound very complicated, practical examples can illustrate the key principles for practitioners. It would be great to see highways engineers – or any others – sharing learning about similar challenges they experience, and to explore how systems thinking could help there too.

This article was originally published here on 20 August 2018 by ICE. It was written by Jeroen Rijsdijk, Arcadis Netherlands.

Retrieved from "https://www.designingbuildings.co.uk/wiki/Highway_engineers_and_drainage"
Create an article