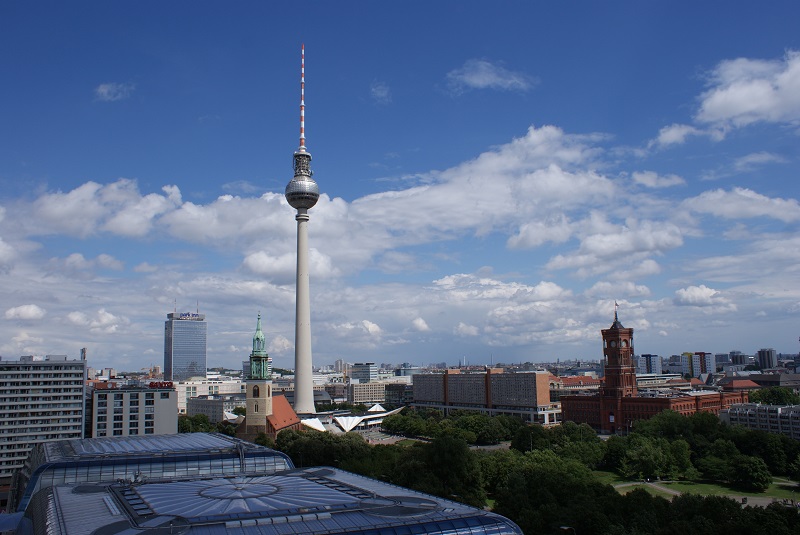 Fernsehturm Berlin is a television tower in central Berlin, Germany. Since its completion in 1969, it has become a prominent and iconic landmark. At a height (including the antenna added in 1997) of 368 m (1,207 ft), it is the tallest structure in Germany and the fourth tallest freestanding structure in Europe.

The tower was constructed by the German Democratic Republic (DDR), intended to be symbolic of Communist power and technical prowess, as well as the strength of East Germany.

The design of the tower demonstrates the influence of the Space Age and new technologies, with the cross-section resembling a space rocket, and the sphere being inspired by the Soviet Sputnik satellite.

The location of the tower caused controversy, centred in a historic medieval area of Berlin, which required significant demolition. A medieval church continues to stand next to the tower as a reminder of the old city that made way for the new construction.

The original design of the slender, upward-thrusting tower stem was prepared by architect Hermann Henselmann, although it was built with the involvement of several East German architects and planners.

Construction began in 1965 using climbing formwork. The shaft of the tower tapers from 16 m diameter to 9 m, and is divided into 5 stages by mezzanine floors. These divisions are marked on the outside by portholes. 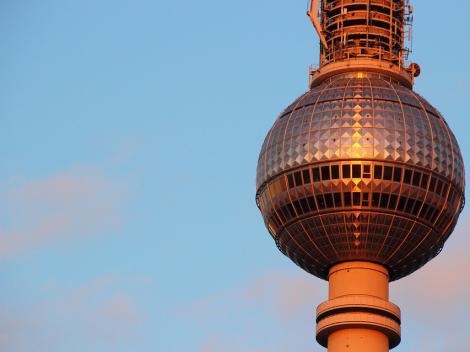 The sphere was designed as a visitor platform with a revolving restaurant in the middle. Its diameter measures 32 m (105 ft) and it is constructed at a height of 200 m.

The first solution to the challenges this presented was a single-shell construction, with the sphere's supporting steel framework being prefabricated on the ground. Cranes lifted the segments up to the required height where they were then attached to the circular platform. This also formed the completion of the concrete shaft. The second solution was to suspend the sphere on supporting tie rods, giving the impression that it is floating.

The maximum movement under wind load at the top of the tower is around 60 cm, with an oscillation frequency at the restaurant level of between 7-10 seconds in particularly strong winds. The tower was fitted with a mass damper, a metal rod weighing 1.5 tons suspended by three cables, with four hydraulic telescopic shock absorbers to accommodate this movement.

The tower has undergone several modernisation works since it was completed and become operational in 1969. In 1993, the interior was renovated, with upgraded transmission equipment for TV stations being added. Two high-speed elevators (top speed 6 m/second) were installed, as well as one for services. General sanitation works were undertaken in 1995/96, and technical installations, HVAC and fire protection system renewed.

The tower continues to be a popular tourist attraction, with a visitor platform in the sphere with panoramic views that can reach 26 miles on a day with clear visibility.

Retrieved from "https://www.designingbuildings.co.uk/wiki/Fernsehturm_Berlin"
Create an article