Evacuating vulnerable and dependent people from buildings in an emergency (FB 52) was written by David Crowder and David Charters and published by BRE on 13 February 2013.

In the attack on the World Trade Center in 2001, more than 1,000 surviving occupants had a limitation that affected their ability to evacuate, including; recent surgery or injury, obesity, heart conditions, asthma, advanced age and pregnancy. An investigation indicated that evacuation flow rates were approximately half those normally observed in fire drills.

There is no simple way to know how long it will take a person with mobility impairments, or a highly-dependent person, to evacuate or be evacuated from a building 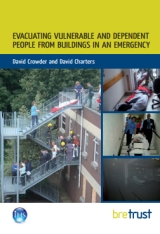 FB 52 provides support for designers, owners and managers of buildings so that they can formulate efficient strategies for the effective evacuation of people with mobility impairments such as the elderly or ill, or children from buildings, residential care, healthcare and domestic premises.

Qualitative guidance illustrates the issues that need to be considered when developing an evacuation strategy that is as inclusive as practicably possible. Formulae and data allow quantification of the relationship between the size and nature of a population that may need to be evacuated, the resources that are available to effect evacuation, and the level of fire protection afforded by the building to be evacuated.

The contents of the 32-page guide are:

Retrieved from "https://www.designingbuildings.co.uk/wiki/Evacuating_vulnerable_and_dependent_people_from_buildings_in_an_emergency_FB_52"
Create an article