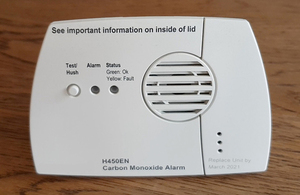 Carbon monoxide (CO) is a colourless, tasteless and odourless gas that is highly poisonous. It can cause serious damage to health if inhaled over a long period, and can quickly cause neurological damage, paralysis or death.

Carbon monoxide is produced when a combustion appliance such as a boiler, heater, oven, and so on, does not completely burn a carbon-based fuel. This might include fuels such as; gas, oil, paraffin, coal, wood or charcoal. Typically, fuel might not be completely burned if an appliance has been incorrectly installed or maintained or if vents, chimneys or flues are blocked. It may also enter a property through shared chimneys or flues.

If a building is powered entirely by electricity, a carbon monoxide detector is not necessary, but there should be one in every room in a building where there is a fuel-burning boiler, fire, or stove.

There are several different types of carbon monoxide detectors/alarms:

Detectors should have a EN 50291 mark and a British Standards' Kitemark (or equivalent European mark). They should be installed in accordance with manufacturers’ instructions, typically at head height in each room with a combustion appliance. They should be tested regularly, and batteries replaced as required.

Since 2010, the building regulations have required that carbon monoxide alarms are installed in properties where a replacement, or new fixed solid fuel burning appliance is installed.

In 2015, the government introduced new regulations requiring private rented sector landlords in England to instal a carbon monoxide alarm in any room used as living accommodation where solid fuel is used. Detectors must be tested at the start of each tenancy, and penalties for failure to comply can be up to £5,000.

In April 2018, the government announced it was undertaking a review of rules that require carbon monoxide alarms to be fitted in homes across England when solid fuel appliances such as wood burning stoves and boilers are installed. The review will examine the regulations to establish whether they remain fit for purpose and will consider new research into the number of carbon monoxide poisonings and whether the rate of installation is being affected by the cost of alarms. (Ref. https://www.gov.uk/government/news/government-to-launch-review-into-carbon-monoxide-alarms)

Retrieved from "https://www.designingbuildings.co.uk/wiki/Carbon_monoxide_detector"
Create an article