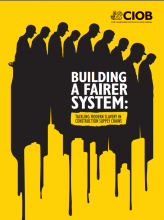 On 13 July 2016, the Chartered Institute of Building (CIOB) published Building a fairer system: Tackling modern slavery in construction supply chains. It was produced in consultation with businesses and NGOs such as Amnesty International, Engineers Against Poverty and the Institute for Human Rights and Business.

In 2015, the UK Modern Slavery Act came into force, requiring UK organisations with a turnover of more than £36 million to report how they deal with human rights issues in their supply chains. The CIOB report is part of an effort to drive forward their campaign in response to the legislation.

'Building a fairer system' calls for greater industry collaboration to eradicate unfair labour practices. It makes clear that slavery remains a hidden problem in many sectors, with the International Labour Organisation estimating that there are 21 million people in forced labour around the world. The construction industry faces particular challenges in tackling these abuses because of its fragmented supply chain, a lack of transparency in the procurement process, and the high demand for migrant labour.

The report makes a series of recommendations for the construction supply chain:

Recommendations for tier one organisations:

In addition to the report, CIOB launched an industry toolkit, as well as a series of training packages in collaboration with specialist providers.

Retrieved from "https://www.designingbuildings.co.uk/wiki/Building_a_fairer_system:_Tackling_modern_day_slavery"
Create an article