In 2009, the Information Commissioner’s Office (ICO) closed down and seized documents from The Consulting Association (TCA). TCA had been holding records of more than 3,000 people, including some transferred from The Economic League, which were intended to protect the construction industry from the labour issues that blighted it in the 1970s and 80s.

However, they actually resulted in workers being blacklisted without their knowledge, for unknown reasons, and with no system for review, appeal, correction or redress. This left some workers unable to find work for many years.

On 4 July 2014, eight of the contractors that had been using the scheme - Balfour Beatty, Carillion, Costain, Kier, Laing O’Rourke, Sir Robert McAlpine, Skanska UK and Vinci - launched The Construction Workers Compensation Scheme (TCWCS) to compensate construction workers who had been blacklisted. They also apologised for their involvement with TCA.

The compensation scheme was intended to provide an alternative to High Court action for affected workers and applied to those involved in the UK construction industry between 1993 and 2009 who were refused work. Compensation payments of between £4,000 and £100,000 could be awarded.

However, union leaders did not agree to the scheme, claiming it was a cynical PR stunt intended to derail High Court proceedings and that the proposed compensation was inadequate.

In October 2015, the eight contractors involved in the case made a statement accepting responsibility for defamation. See Blacklisting case statement for more information.

In January 2016, as the date for the High Court case approached, it was revealed that offers of compensation had increased significantly, to as much as £160,000.

At a hearing in January 2016, it was ruled that 30 contractors must disclose emails and correspondence linked to the case and pay costs for the hearing. Howard Beckett, director of legal services at Unite, said: “Despite admitting their guilt, it is shameful the lengths that some of the construction firms involved in blacklisting have gone to cover up their involvement. It is only now after sustained legal action with the support of Unite that the lid is being lifted on a scandal which has ruined countless lives and led to hardship for many more.”

At the beginning of May 2016, the contractors reached an out-of-court settlement with three of the four organisations representing claimants. Claimants represented by the Unite union were not part of the settlement.

On 9 May 2016, it was announced that a final settlement of £4 million had been agreed with Unite. It is thought that this brought the total payments to more than £10 million to be paid to 256 workers. Payments were expected to range from £10,000 to £200,000. This is in addition to undisclosed sums paid out through the compensation scheme.

It is thought that the total cost, including legal fees, could be as much as £75 million, with the average payout to the 771 workers that received awards being £65,000.

The settlement brought to a close the long-running case.

Unite general secretary Len McCluskey said:“The massive scale of the agreed damages – more than £10m – shows the gravity of the misdeeds of these major construction companies which created and used the Consulting Group as a vehicle to enable them to blacklist trade unionists on behalf of more than 30 construction companies. The sums to be paid out go a considerable way to acknowledge the hurt, suffering and loss of income our members and their families have been through over many years.”

Unite director of legal services Howard Beckett said: “In addition to financial compensation, admissions of guilt and formal apologies, the companies have agreed, as a result of this litigation, to issue guidance to site managers to ensure blacklisting is not occurring on a local level and to ensure that Unite members receive no less favourable treatment for job applications, as a result of this litigation.”

In May 2017, a year after the case was settled, Unite expressed concerns that blacklisting was still taking place and urged the Information Commissioner's Office (ICO) to investigate.

Gail Cartmail, Unite assistant general secretary for construction, said: “A year after the High Court case into blacklisting ended, it is all too obvious that the blacklisting of construction workers is still occurring. Despite blacklisting being a nasty secretive practice, Unite has been able to compile a dossier of these abuses. This is why it is imperative that the ICO re-opens its investigation into blacklisting in order for these practices to be fully exposed and action taken. These injustices will continue unchecked if, as feared, the ICO kicks blacklisting into the long grass and doesn’t even begin to seek evidence until 2018.”

On 4 December 2017, Unite began high court proceedings for unlawful conspiracy against the ‘controlling minds’ behind blacklisting: David Cochrane, Cullum McAlpine, Danny O’Sullivan and Stephen Quant. This action was taken in advance of an anti-blacklisting day of action on 6th December 2017. 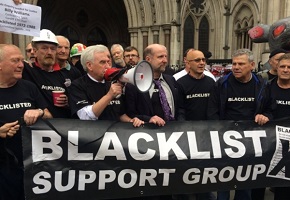 In March 2018, the Metropolitan Police confirmed that undercover Special Branch officers had passed information to the controversial network that blacklisted construction workers. Allegations of police collusion in blacklisting were first made back in 2012 but the authorities vigorously denied the claims. The force said its investigation had 'proven' the allegation, which will now be investigated by the Undercover Policing Public Inquiry.

Shadow Chancellor John McDonnell said: “It is now abundantly clear that various arms of the state, including the police, colluded in the blacklisting process. This is one of the hidden scandals of the abuse of civil liberties in our country that needs to be recognised fully and addressed. The people involved need to be brought to book.”

Dave Smith, secretary of the Blacklist Support Group said; “When we first talked about police collusion in blacklisting, people thought we were conspiracy theorists. We were told, ‘things like that don’t happen here’. With this admission from the Met Police, our quest for the truth has been vindicated. The police are supposed to detect crime, instead they infiltrated trade unions and provided intelligence to an unlawful corporate conspiracy.”

However, in May 2019, Unite settled its action, as a result of which 53 blacklisted workers recieved more than £1.9 million in compensation. The defendants also agreed to pay Unite’s legal fees. Unite acknowledged that it had proved impossible to bring Cullum McAlpine to court. Ref https://unitetheunion.org/news-events/news/2019/may/unite-secures-historic-million-pound-plus-blacklisting-legal-settlement/

On 5 December 2021, Following a review led by general secretary Sharon Graham, Unite announced a new search evidence of collusion with blacklisting in the construction industry by officers of the union and/or its predecessors. Ref https://www.unitetheunion.org/news-events/news/2021/december/unite-announces-beefed-up-qc-inquiry-into-blacklisting-collusion/

Retrieved from "https://www.designingbuildings.co.uk/wiki/Blacklisting"
Create an article