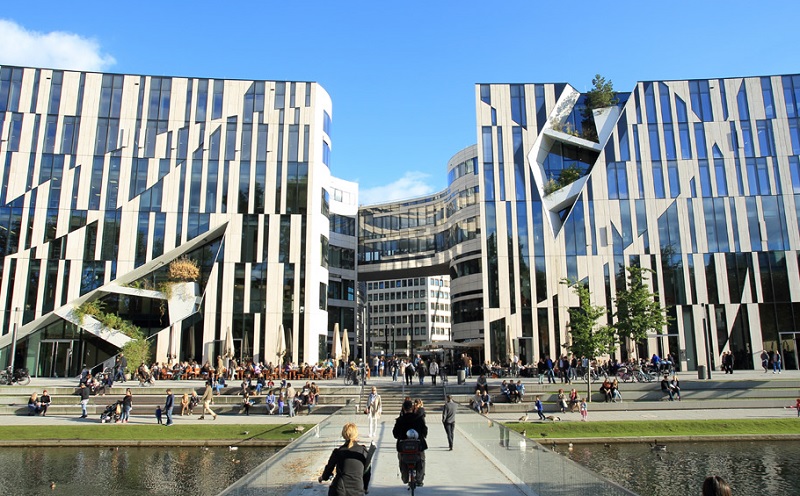 Robert Barrie MCIAT is a 30-year-old chartered architectural technologist, who was born and raised in Nottingham and is currently working in Germany. He studied Architectural Technology and Design at the University of the West of England and found a position during his placement year at Franklin Ellis Architects, in Nottingham, even though in the midst of the last recession. It was his first time working in an architectural practice. His experience of the industry up until then had been more hands-on, having spent a year on building sites as an apprentice bricklayer after he left school.

After graduating, I worked as a graphic designer in Bristol for a few months before moving to London to work for Kyson, an architectural practice in East London, which has a few AT Awards to its name. Living and working in London was a really interesting time for me and it certainly broadened my experience, giving me the opportunity to work on projects including a variety of interiors for restaurants, conversion of shipping containers for office use and new residential and hotel schemes. More recently I worked in Nottingham for Trent University’s Estates Team and just before moving to Germany I worked for CPMG Architects, where I had the opportunity to work on the largest healthcare centre within the UK.

Having worked in a number of cities and on a variety of projects, I felt like the time was right for me to move abroad to challenge myself as it was something I had always wanted to do. In light of Brexit, I made my move sooner rather than later to avoid any potential problems.

I have always been interested in German architecture and its detailing abilities, and I thought it would be a great way to enable me to work on buildings with beautiful detailing.

Within the first two weeks of arriving in Düsseldorf, I started taking intensive German lessons to learn the basics and I began to apply to practices within Düsseldorf and Cologne which had either an office within the UK or had connections with English-speaking clients within their portfolio.

After a few interviews, I received good feedback and my situation looked promising, but these positions failed to materialise for one reason or another.

I started applying for positions further south in Germany, in the cities of Mannheim, Heidelberg and Stuttgart where I found more success and ended up with more than one job offer to choose from. In spring of 2018, I started working for SSV Architekten in Heidelberg which has an outstanding reputation. I was quickly made to feel welcome in the office and was given a small reuse project to work on, converting an old railway signal house into a hip coffee bar/roastery. It was quite draining to start with, having to learn new software in German and working the entire day in German, but it helped improve my language skills very quickly.

My boss understood that my qualification is recognised within the UK architectural profession but I believe that by having a strong design-focused portfolio and having had previous experience using BIM, I had a competitive edge to help me land the position there.

Generally speaking, I feel I have been quite lucky in my career so far to have worked in the ‘project architect’ role and more recently, before the move to Germany, as a contract administrator. I have always enjoyed a challenge and have always been willing to take on greater responsibility – which may be also one of the reasons why I decided to come to Germany.

I would say my role is pretty similar to my normal daily activities as a chartered architectural technologist within the UK, albeit I have yet to undertake every activity that I had previously undertaken (contracts, meeting clients etc). I attend design team meetings on behalf of the practice as well as visit building sites for inspections. I think the difference is that there seems to be a lot more emphasis on the design process from building sketch models and being able to take my time in considering options.

In terms of responsibility, I am currently working on our practice’s new office which will be built on a piece of land previously occupied by US Forces. I find designing anything to do with your own office never easy as every design decision tends to be made as if under a microscope, but I think it also requires a certain level of trust from your boss to allow an employee to work on this type of project.

The biggest barrier by far for me has been the language, or ‘die Sprache’. It has been hugely challenging to learn, both on a professional and personal level. Coming from a country where I felt comfortable with the building processes, building regulations and documentation to a country with different building regulations (depending on where you are building in the country) can be quite daunting at first.

The only barriers that I am aware of is that I am not currently allowed to open an architectural company here or sign-off a building for final completion. Yes, some may say they are quite big barriers, but from what I have found, only the managing directors manage these procedures here anyway. So therefore, if you’re looking for work as an employee, there should be no problems.

The architectural technologist role here is a mixture of a traditional German ‘architekt’ and a ‘haustechniker’, who are generally responsible for the M&E design and the implementation of technology in buildings. There is also a role here which goes by the name of ‘bauzeichner’ that directly translates to ‘building drawer’ – which could be compared to the technician role in the UK. On the whole, there is no direct equivalent.

Something that I am finding to be increasingly discussed in Germany is BIM. Unlike the UK, there was no government mandate for the use of BIM methods for designing and construction. I would say that in general the use of BIM building methods seems to have been comparatively slow and now I am hearing exactly the same questions being asked in meetings that were asked in the UK three to five years ago.

I have always wanted to work in a foreign country, so first of all, I believe you should have a real desire to want work and live away from the UK, even if it is only for a year or two. If you would like to but are too comfortable within your current position, then you will never do it—you have to commit to it and see it through. Secondly, I know that there are many talented chartered architectural technologists out there, so I would strongly urge you to be confident with your talent and abilities and do not be afraid to try new things—especially if you are thinking that the UK is the only option for you. Finally, having a network of close people which I built before moving always helps. There have of course been highs and lows since I moved to Germany but it is to be expected when moving countries.

I am also looking into taking up a position within the CIAT Europe Centre in due course. Furthermore, I have recently started designing and making my own furniture here in a local workshop, so I am hoping to launch my own furniture business. Look out for Bernd and Barrie soon!

This article was written by Robert Barrie MCIAT. It was first published in CIAT’s AT Journal No 128 Winter 2018-2019 and can be accessed here.

Information and other articles by the Chartered Institute of Architectural Technologists (CIAT) can be found here.

Retrieved from "https://www.designingbuildings.co.uk/wiki/Architectural_technology_in_Germany"
Create an article