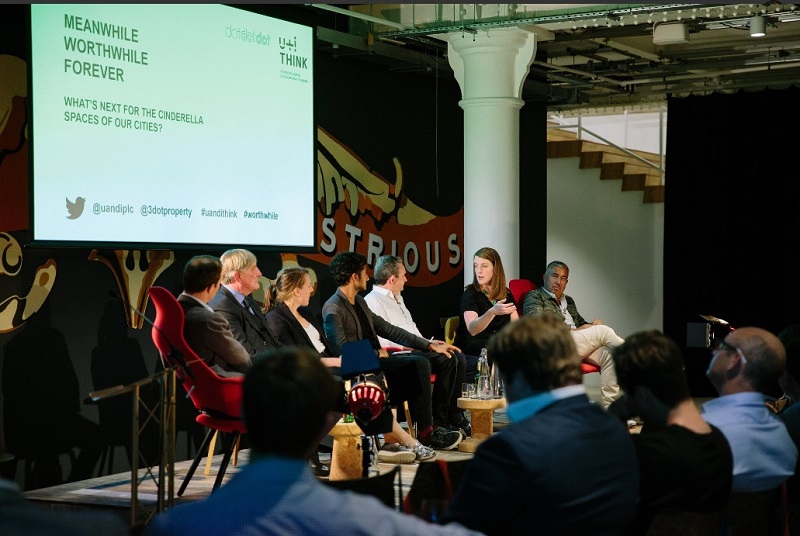 The event took the form of a panel discussion on the future of ‘meanwhile use’, chaired by urban regeneration adviser David Barrie.

Across the country, temporary uses have become permanent fixtures. At Elephant & Castle, an alphabet soup of mobile gardens and shipping containers has been fast turning into a new community of growth entrepreneurs. Pop Brixton is now seeding new ventures, capturing the energy and excitement of the entrepreneur in dead car parks and a derelict sweet factory.

Richard Upton, deputy CEO of U+I, introduced the discussion by suggesting the best form of regeneration is organic, building on what is there, and supporting diversity. He compared developers of meanwhile uses to farmers cultivating places. It was important, he said, to see the space as an “incubator for the future rather than as patronising window-dressing”, with a view to long-lasting development.

Roger Wade, founder of BoxPark, said there were “a lot of vanity meanwhile projects out there”. In his view, as a property developer, it is simply all about good business. “Buildings alone are not going to sell an area, architects love to think that, but it isn’t reality. People want to live in ‘places’”.

Eric Reynolds, founding Director of Urban Space Management, said the key question to ask was “who is it for? SMEs or the public?” He said meanwhile use was generally positive and pointed to the example of Smithfield which had been left open for something bigger and better to be developed for years, before it was finally announced that the new Museum of London would be developed there.

Katharine Hibbert, founder and Director, Dot Dot Dot, cited one of her favourite experiences of meanwhile use - a spa day in a Barking car park. She said she had been equally excited while browsing through empty and biddable spaces on Open Poplar. She also suggested the most heart-warming aspect of working in meanwhile use was seeing “what a difference to people’s lives it makes having an affordable place to live in a space that would otherwise be empty.”

Reza Merchant, CEO of The Collective and Pop Brixton said the success of meanwhile use very much depends on the longer-term goal. He claimed that millennials need smaller and more vibrant independent places rather than “another branch of Nandos” to make their experience unique and worthwhile.

Dan Taylor, Programme Manager (Regeneration) at the London Borough of Southwark, highlighted some of the quirky meanwhile uses that Southwark council have been involved with. These included the Melting House art installation where a full-size house made of wax gradually melted over a period of several weeks; and the House of Pain which turned an old dentist's surgery into a space where passers-by were encouraged to have a cathartic yell which generated an instant light display illuminating the entire building.

On the subject of whether it was possible to do something worthwhile or whether it was all about quirky entertainment, Taylor said that an appropriate legacy was needed. He cited a social enterprise at Elephant & Castle, Hotel Elephant, which creates artistic workspaces and galleries and has recently been given a 25-year lease under 5 railway arches to deliver workspaces to local entrepreneurs and students. “They now have a long-term stake”, he said.

Hibbert said she thought meanwhile use was difficult because a lot of social services - people coming out of care, returning from armed forces with PTSD, those who are vulnerable, etc. – need stability and permanence, which meanwhile use perhaps isn’t best able to provide.

Anna Strongman, Senior Projects Director at Argent, suggested the challenge comes when ending the meanwhile use after building something good and socially conscious. She said it was vital to be transparent about the intentions from the start, and think about how legacy can be built from what has been done, something which is not always easy when relationships have been forged over the course of the meanwhile use.

Wade was sceptical about the social ethos of meanwhile use - “saying you are socially conscious may go down well in council offices but it isn’t the main reason we do this…. A lesson from working in retail is that our mission is to provide special places. That’s all we do – we’re in the business of making places a bit more special.”

Reynolds perhaps hit the nail on the head with the comment that “it is difficult to do that when everyone wants and is trying to be ‘special’.”

Retrieved from "https://www.designingbuildings.co.uk/wiki/UandI_Think_event_-_Meanwhile_Worthwhile_Forever"
Create an article