The rise of multiple property ownership in Britain

This article was written by Laura Gardiner and originally published by the Resolution Foundation.

When is a house not a home? Increasingly often, it turns out. Be it a holiday cottage for weekend getaways, a pied-à-terre in the city, a flat rented out for a bit of extra income, or an empty shell of bricks and mortar working harder for your savings than an ISA possibly could – multiple property ownership is rising.

An important and symbolic feature of the shifting patterns of wealth accumulation in 21st century Britain, here we explore how multiple property ownership is changing, who owns the second homes, and what the policy implications of these trends are.

[edit] The rise of the second home owners

In 2012/14, four-in-ten adults had no wealth in property at all, but one-in-ten had wealth in multiple properties (5.2 million adults, up 1.6 million since the turn of the century). These twin trends – fewer people with any properties and more with many – underpin the growing concentration of housing assets that is fuelling the recent increase in overall wealth inequality. 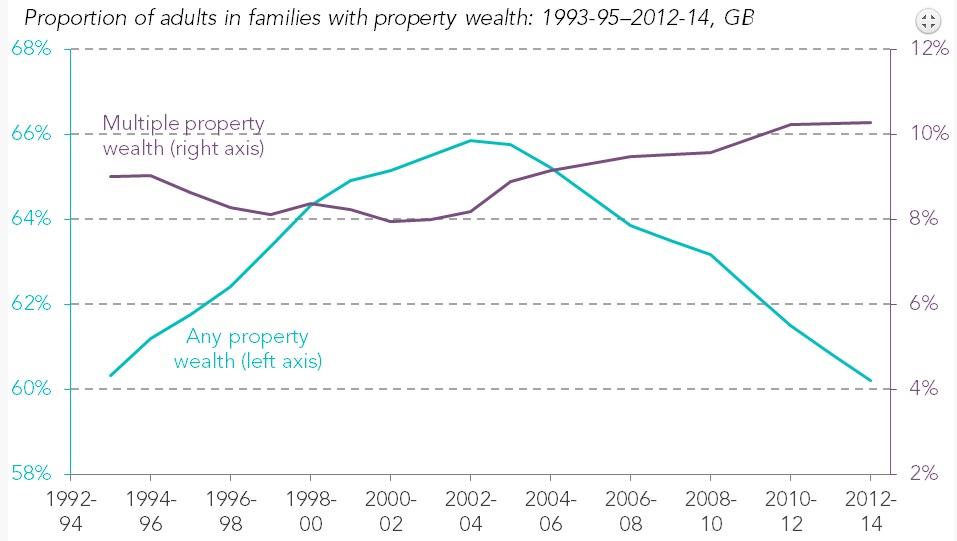 Disregarding mortgage debt (because of difficulties in identifying which properties mortgages are secured against), the assets held in second or additional properties had a gross value of £760 billion in 2012-14 (adjusted to 2017 prices) – that’s 15% of the £5.2 trillion held in gross property wealth overall.

Not only can multiple property ownership boost wealth – which is important for living standards over lifetimes and particularly in retirement – it also has the potential to boost incomes in the here-and-now, because these properties can be rented out.

Consistent with recent growth in the private rented sector (which is provided by a mix of commercial institutions and private landlords), the proportion of adults in the UK receiving income from other property as landlords doubled between 1998/99–2000/01 and 2013/14–2015/16 – from 1.7 - 3.4%.

Previous research suggests that the typical annual rental income among this group was around £6,000 in 2008/10 – more than a quarter of typical salaries at the time – underscoring the difference such a source of income can make to living standards.

So multiple property ownership remains a minority sport, but one growing in popularity and with the potential to significantly boost wealth and income. It’s therefore right to ask who does it. Three key features stand out:

[edit] They are mainly baby boomers and members of generation X

Half (52%) of all the assets held in additional properties is held by the baby boomers, born 1946-65, and a further quarter (25%) by generation X, born 1966-80. But of course, we might expect this – wealth varies hugely over the life-cycle and peaks around retirement age. And, as the name suggests, the thing about the boomers is that there are lots of them.

The chart below overcomes these challenges by showing average gross additional property wealth across all adults in successive birth cohorts and at different ages.

What’s striking is the doubling of additional property assets for those born in the 1940s compared to the cohorts before them when they were the same age – it seems the oldest in society today never really got into the second homes game in a big way. All generation X and baby boomer cohorts then improve on their predecessors at the same age. 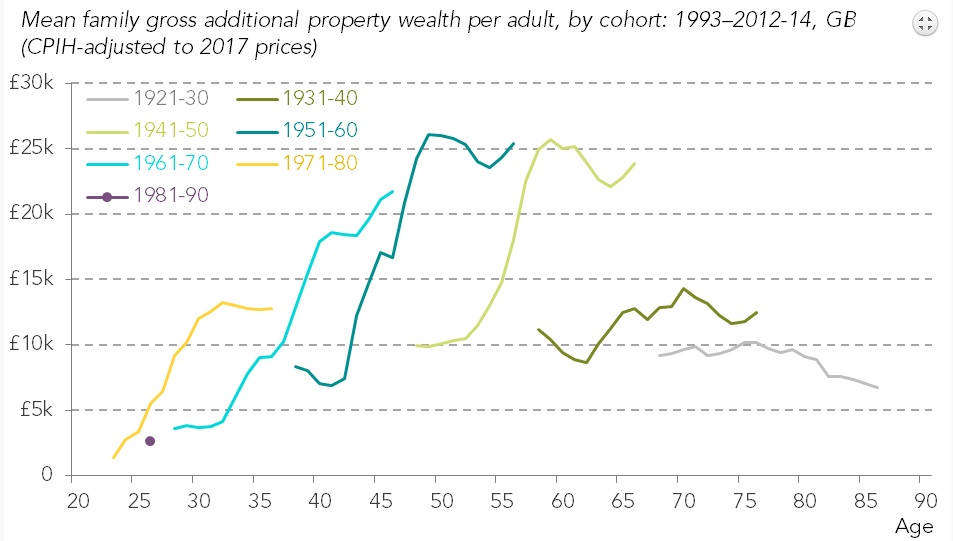 The inescapable conclusion is that those in prime age and early retirement today have so far been the big winners from the rise in second home-owning.

[edit] They are overwhelmingly rich and wealthy

Owning additional property is sometimes depicted as a common way for typical workers to shore up savings or for ordinary folk to boost their pension with rental income. But situating multiple property owners and private landlords within the wealth and income spectrums makes them seem far from ordinary. 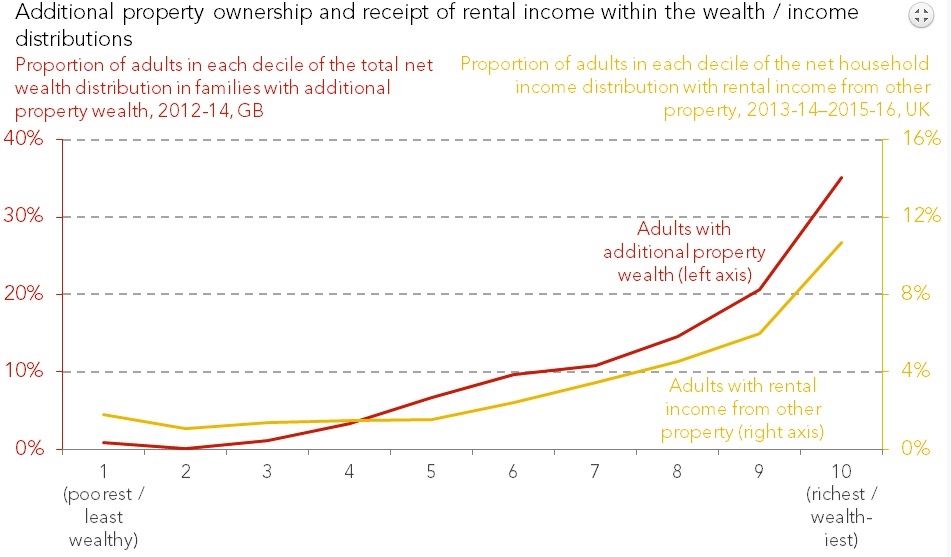 Of course, you could argue that these comparisons to all other adults are a bit unfair. For example, we know that additional property assets are concentrated among the baby boomers who are currently at peak wealth-holding age.

By the same token, the common argument that rent from other property is a way of boosting pension incomes means we might expect it to only really be a relevant consideration in retirement, when incomes are now slightly higher and people are less likely to be poor.

The clear message is that both across society as a whole and among their peers, those drawing on wealth or income from additional properties are disproportionately rich and wealthy.

[edit] They are concentrated in the South of England

We don’t know where the additional properties are, but analysis of where those receiving rental income from them are based shows a particularly high prevalence in the regions that make up the south of England, as the chart below shows.

Nearly six-in-ten landlords (59% of the total) are found in the four regions where it is most common: the South West, South East, East of England and London. Unsurprisingly, these are the areas where incomes and average wealth are highest (and in the case of the South West in particular, a higher concentration of older adults will also contribute to this pattern). 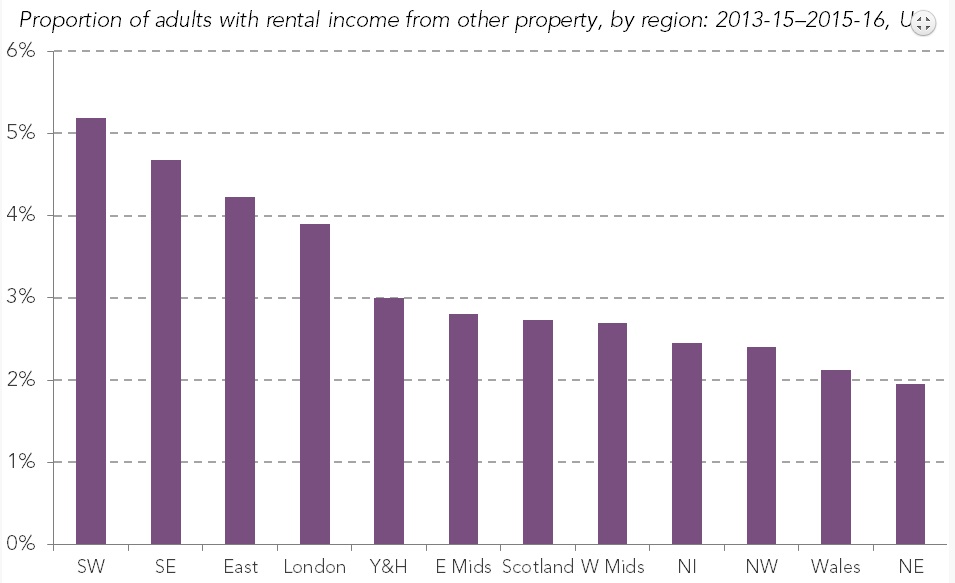 [edit] A case for action?

In sum, holding assets in more than one property has grown in recent decades, and can be a huge boon to both wealth and incomes. The second home owners are mainly adults in prime age or early retirement, are rich and wealthy even among their peers, and are most likely to be living in the south of England. Of course, there are individual exceptions, but stepping back to the big picture: if you were painting an image of society’s affluent, this would be it.

Given that younger generations are failing to accumulate wealth at anything like the rate of their predecessors, and that we have a housing crisis that manifests itself in concerns about security and quality for those renting from private landlords, this state of play seems far from optimal.

And, to be fair, this is one aspect of the shifting patterns of wealth accumulation in 21st century Britain that policy makers have woken up to in recent years, with attempts at action. Stamp duty surcharges on second homes were introduced last year, and reduced mortgage tax relief for those engaged in buy-to-let came in in April 2017.

These steps have pros and cons, but there’s a case for thinking even more broadly – from implementing the commitment to tackle empty homes in the recent housing white paper, to greater regulation of private landlords and increased security of tenure to shore up tenants’ position. And from a taxation perspective, the reality of a larger second home owning group, made up largely of older, very affluent people cannot be ignored as we wrestle with the public finance pressures of an ageing society.

These are options and challenges our Intergenerational Commission will continue to explore, because from the perspective of many of Britain’s real ordinary folk who still desire to own their home but find doing so increasingly out of reach, one house would be enough.

This article was originally published here on 19th August 2017 by the Resolution Foundation. It was written by Laura Gardiner.

Retrieved from "https://www.designingbuildings.co.uk/wiki/The_rise_of_multiple_property_ownership_in_Britain"
Create an article