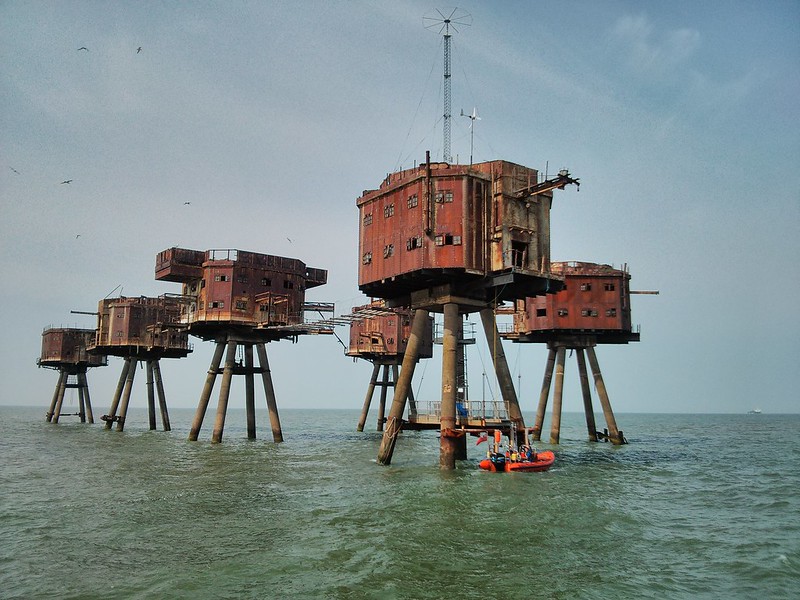 The Maunsell forts, located in the Mersey and Thames waterways, were built from 1941 to 1942. The forts were part of the British anti-aircraft defences against Germany during the Second World War.

The forts were designed by (and named after) Guy Anson Maunsell, a civil engineer and former commissioned officer who served in the Royal Engineers during the First World War. The initial concept of the sea fort was born in 1940 after Maunsell came up with the idea for a defensive structure that would be built into the sea floor but would rise above the water’s surface.

In 1955, Maunsell established G Maunsell & Partners (now part of Faber Maunsell) and became associated with the introduction of prestressed concrete for highways and transportation. His firm first achieved success in Australia, and eventually established itself in Britain, where its work on the Hammersmith Flyover - completed shortly after Maunsell’s death in 1961 - still stands today.

[edit] Development and construction of the forts

Maunsell’s original plan for the forts projected a two month timeline for construction. Once the design was accepted by the Controller of the Navy, the project began. Work on the first fort, situated at Red Lion Wharf in Kent, started in 1941.

Made from reinforced concrete and steel, the forts were essentially pontoon barges installed underwater. Positioned above them were towers (also made from concrete) divided into different floors. These not only supported the platforms above, but also served as living and working quarters for up to 265 crew members. As more Maunsell forts were constructed, they were connected by catwalks.

The platforms were outfitted with anti-aircraft guns and a command centre that could serve as additional living and working quarters.

With one exception, the forts were initially assembled on shore for crew members to explore in advance. They were then transported out into the water and permanently installed.

In addition to serving as lookout points, the forts deterred attempts by the Germans to plant mines in the important shipping waterways.

The three Mersey forts were constructed at Bromborough Dock and installed in Liverpool Bay. They were meant to protect Liverpool from attack, but none of the forts were involved in action during the war. They were all demolished by 1955.

While in service, the Maunsell forts at the Thames estuary took down 22 planes and 30 flying bombs. They also destroyed one German attack boat. They were officially decommissioned in the 1950s, but some have continued to operate in different capacities.

Rough Sands was occupied and operated 1966 as Radio Essex, but a dispute between Paddy Roy Bates and Ronan O'Rahilly over its ownership resulted in violence. Bates eventually prevailed. Since the fort was not under the jurisdiction of British authorities, he then established his own country, the Principality of Sealand, with a constitution, flag and national anthem. Bates, or some other “resident” of Sealand, still lives at Rough Sands.

Sunk Head was decommissioned in 1945 and abandoned in 1956. A radio tower was briefly set up but was quickly disbanded. After problems with ownership of pirate radio stations escalated (first on Rough Sand and then on Shivering Sands), officials decided it would be best to avoid further rogue operations and blew the structure up in 1967.

Tongue Sands was decommissioned in 1945 and abandoned in 1949 after its condition deteriorated. Part of it fell into the sea in 1947 and in the 1960s, additional damage created large holes throughout the structure. Most of what remained collapsed into the water during a storm in 1996.

Knock John was decommissioned in 1945 and abandoned in 1956. It is currently still standing.

Nore was damaged during a storm in 1953 and then damaged further in 1963 by a Norwegian ship that collided with one of its supporting towers. This accident killed four people and destroyed equipment on the ship. Much of what was left of the tower was dismantled in 1959 - 1960. Nore was the only fort built in situ.

Red Sands is still standing and was operating as a pirate radio station during the summers of 2007 and 2008. It was later declared unsafe for occupancy, but visits to a platform between the legs of the fort can still be arranged. Efforts to preserve Red Sands are ongoing. Red Sands is pictured above.

Shivering Sands is abandoned, although it is still partially standing. In 1963, a ship lost its way during poor weather conditions and collided with one of the towers, which eventually collapsed. Weather equipment was installed into another tower in 1964; this was the same year Radio Sutch was set up in one of the other remaining towers. After ownership of the station was sold to Reginald Calvert (who changed the station’s name to Radio City) another violent dispute resulted in Calvert’s death. This lead to legislation in 1967 that made it against the law to operate offshore pirate radio stations. One of the other towers was used by the artist Stephen Turner in 2004 - 2005 for a project about isolation.

Retrieved from "https://www.designingbuildings.co.uk/wiki/Maunsell_forts"
Create an article