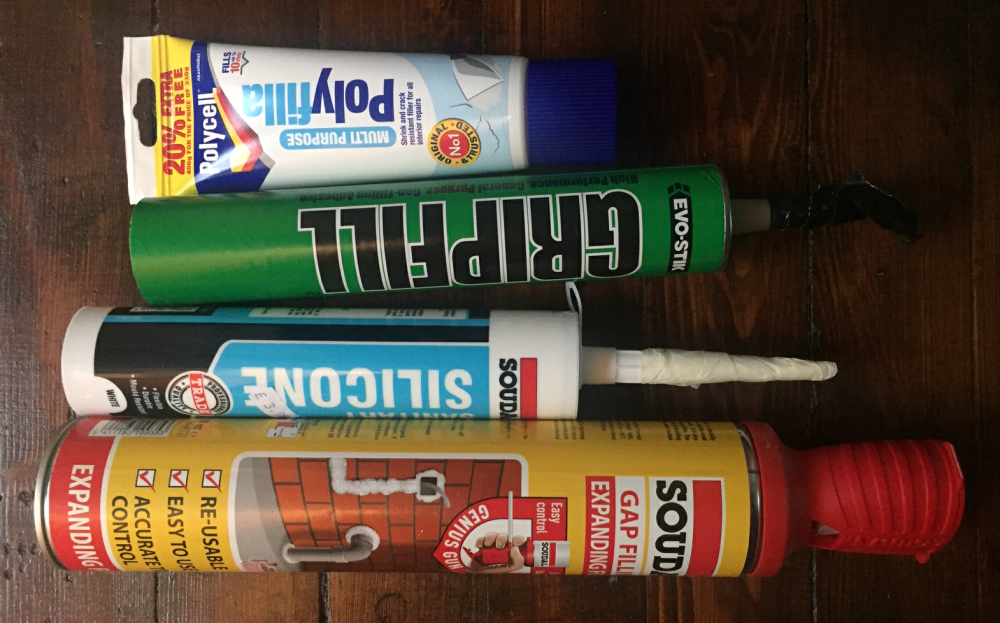 In the construction industry, fillers are generally either:

Fillers for gaps have a wide range of densities, drying times, waterproofing, breathability, adhesive qualities, flexibility, colour, coarseness and so on depending on the required use.

For example, mortar can be considered a filler, as it effectively fills the gaps between bricks or stones. For more information see: Mortar.

Grout is fluid, viscous material that is used to fill and seal gaps. It is similar to mortar, but the water concentration is greater and it is less stiff which makes it more suitable for filling complex, inaccessible or small spaces. It is commonly used for tiling. For more information see: Grout.

Caulk is a commonly used filler used by decorators. It is a flexible filler typically made from acrylics or silicone, that dries quickly, but remains flexible, and so it is suitable for use where movement may be expected (such as between a plaster wall and a timber skirting). Historically caulk was made from fibrous materials that could be driven between boards, pipes and so on to make them waterproof, and rope caulks are still available.

Silicone is a man-made polymer that is derived from silicon. It is a class of silicon-based chemical compounds that can be used to form flexible, adhesive, waterproof joints, for example around baths and showers.

Putty is made typically by mixing a finely ground chalk (whiting) with linseed oil. It is commonly used in traditional glazing to seal panes of glass into timber frames. Synthetic putty can be made using polybutene.

Dry fillers are available in a powdered form, and typically consist of a powdered aggregate and an adhesive, to which water is added to the required consistency. They can generally be sanded when dry to a smooth finish and can then be painted with conventional paints.

Ready mix fillers are essentially dry fillers that have been pre-mixed so they are ready to use. They come in different degrees of stiffness, coarseness adhesion and flexibility depending on the use for which they are required. They also come in multi-purpose forms which are suitable for most common applications.

Highly-adhesive fillers are available which not only fill gaps, but also bond the items on either side of the gap, combining the properties of a filler and a glue. These are now commonly used as a substitute for nails.

Expanding foams are available for large, complex or difficult to reach gaps. They expand significantly on being discharged from a can to fill almost any size or shape or hole.

Retrieved from "https://www.designingbuildings.co.uk/wiki/Fillers_for_construction"
Create an article