This article originally appeared as ‘Ten kinds of loss’ in IHBC’s Context 151, published in September 2017. It was written by historic buildings consultant Peter de Figueiredo. 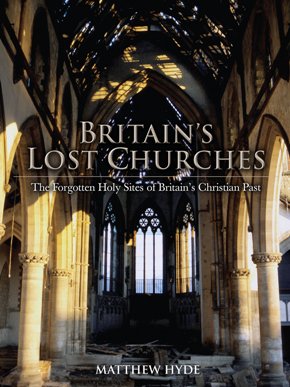 This book about lost churches, published posthumously just after Matthew Hyde’s untimely death in 2015, can be regarded as a memorial to a uniquely distinctive voice. Of all the talented architectural historians who have worked on updating the Pevsner Buildings of England series, Hyde came closest to capturing the original author’s idiosyncratic style; for, like Pevsner, he has a simple, engaging and often witty way with words that brings buildings alive.

As the author states, ‘One of the rules of the Buildings of England, Scotland and Wales is that they do not include lost buildings, however intriguing. If it’s gone, it has gone’, and he sees the book as a kind of redress. But unlike other books on this theme, it is not a nostalgic collection of photos of demolished churches. Hyde has a more serious purpose, examining the causes of loss and decline, and revealing the stories and circumstances behind the changes to sacred places. His celebrated quote from Ecclesiastes, 3 ‘For everything has its season, and every activity under heaven its time’ sets the scene.

What follows is a series of 10 chapters that describe the differing kinds of loss he has found on his Pevsnerian and other travels. ‘Total loss’ is the first, into which he places just one building, St Albans, Cheetwood, a casualty of changing fashions in liturgy and depopulation of inner-urban Manchester. Chapter 2, titled ‘Abolished’, presents the more complex picture that resulted from the suppression of the monasteries. Here he compares the fate of Glastonbury, the richest of the religious houses in England, of which little survives, ‘all shaven lawns and admonitory notices’, with the tiny settlement at Calder Abbey, with nine monks in residence at the dissolution, which is now a neglected and romantic ruin in the shadow of Sellafield Nuclear Power Station.

‘Lost and found’ reveals the intriguing discovery of the former Royal Chapel of St Stephen at Westminster, lost, found and then lost again, one of the most influential of all English churches. Others that have unexpectedly appeared include the Saxon chapel of St Lawrence at Bradford-on-Avon, which emerged in the 1850s from a jumble of buildings that had completely enclosed it.

‘Drowned, swept away, buried alive’ charts those churches lost for the construction of reservoirs to provide clean water for industrial cities; ones that have fallen into the sea due to coastal erosion; and those buried by shifting sand. Among the latter category is St Enedoc, beloved of John Betjeman, whose famously boshed golf shot on the nearby links was seen on TV, and who lies in the churchyard. In the early 19th century only the steeple of the church and its gable tops were visible above the sand dunes, and the vicar had to be lowered in through a hole in the roof to say the yearly service that prevented its legal abandonment.

‘High romance and hidden meanings’ has a more mystical theme, connecting ruined churches with more ancient sites, and recounting the strange tale of Rosslyn Chapel, which was recently conserved with funds raised from visitors on the back of its fictional fame in ‘The da Vinci Code’. ‘(Re)moved’ provides varied examples of relocations, including a tin tabernacle, a Wren city church and the spire of a chapel moved from Ramsbottom to Manchester.

There are also chapters on ‘Lost cathedrals’, ‘Chapels’, and ‘Blitzed’, with the final one being entitled ‘Hubris’. Here he describes churches where over-ambition led to generally dire results. The finale is St Peter’s College, Cardross, where the brutalist seminary that opened in 1966 is one of the most challenging conservation projects of today.

Finely illustrated and well produced, this is an informative and entertaining book which poses many searching questions about how we treat our most sacred buildings, and for what ends.

This article originally appeared as ‘Ten kinds of loss’ in IHBC’s Context 151, published in September 2017. It was written by historic buildings consultant Peter de Figueiredo.

Retrieved from "https://www.designingbuildings.co.uk/wiki/Britain%27s_Lost_Churches"
Create an article