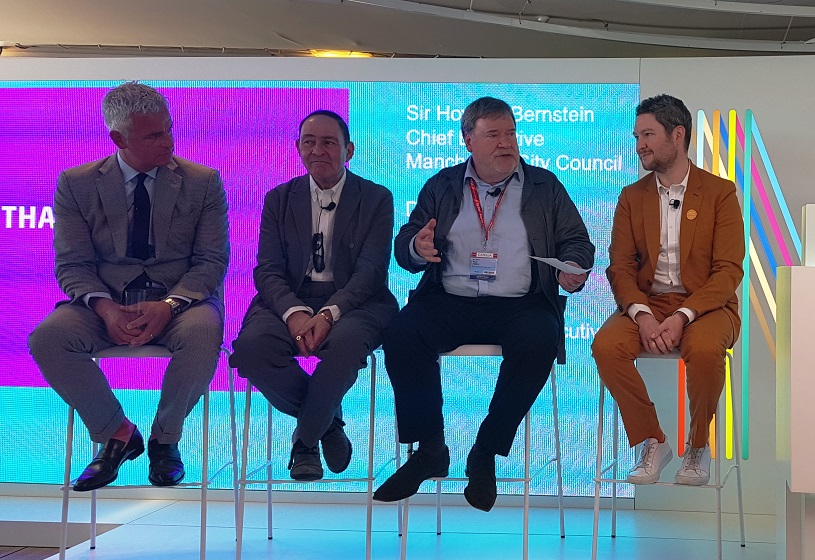 The Mayfield Partnership outlined its vision for the regeneration of the historic 24-acre site in Manchester to a global audience at MIPIM.

At the event, entitled 'Original Modern: Making Mayfield', Richard Upton, Deputy Chief Executive of U+I, the regeneration and development company appointed to lead the transformation of Mayfield, premiered a specially-commissioned film and poem, Manchester's Sprawling, by Manchester spoken-word artist Argh Kid, which you can watch here.

The poem, Mr Upton said, conveyed U+I's sense of vision for Mayfield, which he pledged would be a "soulful transformation" of the once thriving industrial site next to Piccadilly Station which has been derelict for 30 years.

The panel debate, held in association with the RIBA, was facilitated by Stirling Prize winner Stephen Hodder MBE, chairman founder of hodder+partners and a former president of RIBA.

Mr Upton said the approach to Mayfield was about three things: reflecting the spirit and aspirations of Manchester; creating an authentic sense of place; and engaging with and listening to local people.

He added: "We want Mayfield to attract the best in the world to Manchester’s future... We believe in creating exciting modern places that recognise and embrace their past. We find when we put energy into meeting, and listening to, local people and local stakeholders we create better places."

Mr Upton said that in bidding to deliver the project, U+I had taken a different approach by not "wiping away" the site's history.

"Our proposal – brought to life by Studio Egret West – showed how we could knit the past into the present and the future. We believe in respecting, revealing, and valuing the history of a place. That we have a responsibility to the land and its past."

He said developments like King’s Cross in London, and OMA’s regeneration of the Zollverein coal mine in Essen, Germany, show how you can marry the past and present in exciting ways to create great places.

"It’s no coincidence that Google’s offices are now in the Kings Cross area. Great companies want great places for their people because happy, engaged, stimulated people – who don’t hate their office and the area it’s in – are more creative and more productive.

"I want Mayfield to attract the next Google. To be the home of innovative, disruptive companies yet to come – companies that share the spirit of Richard Arkwright, Alan Turing and Tony Wilson."

Mr Upton revealed that he and his team had undertaken extensive research into the history of the site back to the late 18th and 19th centuries, when textile company Thomas Hoyle & Sons, which was based at Mayfield for more than 200 years, perfected a way to print complex multi-colour designs onto cotton cloth at a rate of 1,200 m an hour - a world beating innovation at that time.

"To me, Hoyle & Sons are a great example of the spirit of Mayfield – an example of the power of possibility. We want people who work, live, and play in Mayfield to feel that spirit – to feel that in the day ahead, even on a damp Manchester Tuesday, they can do anything."

Turning to the Mayfield Partnership's recent planning application to Manchester City Council to bring part of the site back into use this year, he said the ethos is to "work with local talent, start small, and grow organically.

“Our partners, and the people who will come to live, work, and play in Mayfield – and the city of Manchester itself – have all put their trust in us. We want to make them proud."

Sir Howard Bernstein hailed the film as one "of the best I have seen - capturing the vision perfectly".

“I think over the next 10 years we will see something spectacular emerging that can drive the growth of the city and the wider region.”

David West of Studio Egret West said: “'We have created an alliance with the partnership about the importance of creating a sense of place. It's everyone's challenge now to make sure it's fantastic.”

Paul Finch, director of the World Architecture Festival said: “It will be a new quarter for the city unlike any other. It's an amazing opportunity. You can't fake authenticity and Mayfield has that heritage. It's a brilliant opportunity.”

Event chair, Stephen Hodder MBE added: “Mayfield is a hidden treasure waiting to be discovered - with its stunning industrial heritage. It's a wonderful opportunity to marry the old and the new and create something world class.”

Find out more at mayfieldmanchester.co.uk

This article was originally published here by U+I on 15th Mar 2017.

Retrieved from "https://www.designingbuildings.co.uk/wiki/UandI_at_MIPIM_2017"
Create an article