The £4.2bn (at 2011 prices) Thames tideway tunnel project comprises a 24km long 7.2m diameter sewer 60m (average) below ground. The project plans were approved by the government on 12 September 2014. The tunnel will run from Acton in the west to Abbey Mills in the east. It will have a holding storage capacity of 1.6 million cubic metres.

Its purpose is to protect the River Thames from the frequent overflow of Victorian sewers designed for a much smaller population. Recently, flash flooding has caused sewers to back up and flood residences in west London.

Its route generally follows the Thames, at a fall of 1 in 790, it intercepts 34 overflow facilities and will require a number of significant connecting tunnels to other existing sewers. The project also includes new, expanded or replacement pumping stations, increased capacity storm water holding tanks and expanded sewage treatment works at Beckton which will capture the new tunnel contents via the newly constructed Lee Tunnel. 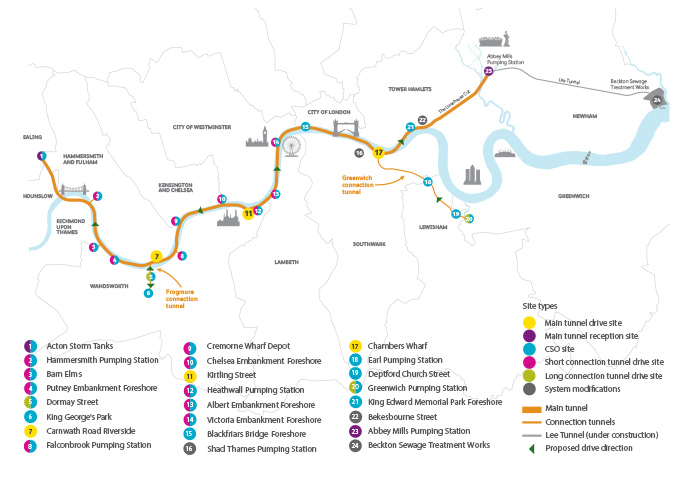 Thames Water (via a special purpose vehicle, Thames Tideway Tunnel Ltd) tendered the main tunnel work to the international market in three sections. UK consortia have been selected for all three projects:

Construction is due to start in 2016 and complete by 2023. There are 23 construction sites. Some are on land already owned by Thames Water and others are on new sites still to be acquired, particularly those on the Thames foreshore.

The river will be used as much as possible to remove excavated material and deliver tunnel segments and construction material. At the combined sewer overflow (CSO) interception sites, construction of vertical cylindrical shafts some 60m deep will be built with internal diameters ranging from 7m to 20m to enable connecting culverts to be constructed that link existing sewers to the new tunnel. The main drive sites will require even larger 30m diameter x 60m deep shafts to allow the tunnel boring machinery to be lowered into position.

Thames Water are to fund £1.4 billion by spreading the cost across its consumers. This could add £80 to average annual bills by 2020 across its 15m customers. Thames Tideway Tunnel Ltd will raise £2.8 Billion (2011 pricing) for the capital works based on future revenue income contracted with Thames Water.

In July 2015, it was announced that Bazalgette Tunnel Limited would finance, deliver and own the sewer. This is a consortium consisting of Allianz, Amber Infrastructure Group, Dalmore Capital Limited and DIF.

In 2017 it was reported that ahead of tunnelling in 2018, the main focus of work had been at the three main drive sites. These are for launching the 7.8 m diameter tunnel boring machines (TBMs) and will serve as material transport hubs and head offices for each of Tideway's three main NEC3 works contracts – west, central and east. For more information see: Thames Tideway update.

In February 2020 it was reported that tunnellers had passed the halfway mark on the £3.8bn project.

In September 2020 it was reported that the main tunnel drive for the first major section of the tunnel had been completed.

Retrieved from "https://www.designingbuildings.co.uk/wiki/Thames_tideway_tunnel"
Create an article