On 12 September 2017, Transport Secretary Chris Grayling published plans for the £1.6 billion A303 Stonehenge upgrade, a key part of the ‘South West expressway’ linking the M3 and the south-west. 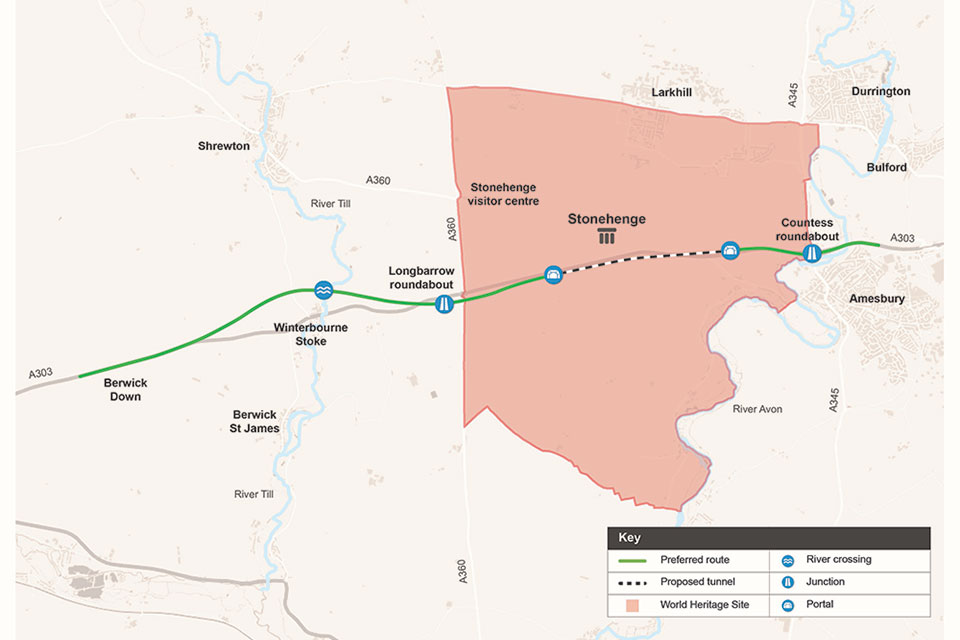 The plans include a new tunnel near Stonehenge which will allow the 2 halves of the 6,500 acre World Heritage site to be reconnected, and will remove the blight of traffic from the Stonehenge landscape.

A public consultation was held earlier in 2017, and following this and further engagement with local communities, heritage groups, archaeologists, historians and engineers, Highways England has produced modified plans, which move the position of one of the entrances to the tunnel to avoid conflicting with the solstice alignment.

The tunnel will be at least 1.8 miles long, closely following the existing A303 route, but 50 metres furhter away from the monument. The government has also committed to upgrading the remaining sections of the A303 between the M3 and M5 to dual carriageway standard

Chris Grayling said; “The A303 upgrade between Amesbury and Berwick Down is a key part of the government’s £15 billion road strategy - the biggest investment in roads in a generation. The scheme includes the 1.8 mile-long tunnel, a free-flowing dual carriageway and a much-needed bypass north of Winterbourne Stoke.”

Highways England chief executive Jim O’Sullivan said; “The A303 and the World Heritage site has suffered from congestion for many years. This scheme will enhance, protect and restore tranquillity to one of the UK’s most iconic landscapes. We have listened to feedback from consultation and believe this preferred route will help improve traffic flow, reduce rat-running on the surrounding roads, bringing improvements to local communities and benefits to the south-west economy.”

Secretary of State for Culture, Karen Bradley said; “This investment from the government will help make the visitor experience much more enjoyable and this is good news for local residents and businesses who will benefit from the new route. The government will also continue to work closely with key heritage bodies to ensure this scheme respects and protects the Stonehenge World Heritage site.”

In February 2018, Highways England’s amended plans for the road tunnel went on show at a series of public events.

Since the September 2017 consultation, the designs have been amended to try to appease groups concerned about the impact of the project. Highways England say their advised route avoids monuments and barrow burial mounds, as well as reconnecting the World Heritage Site.

The plans involve a tunnel that, at just under 2 miles (3 km), is slightly longer than previously designs, with a grass-covered canopy to help the road blend into the landscape. However, fresh concerns have been raised about the new plan creating a route for vehicles on the surface, closer to the monument.

The consultation runs until 6th April 2018. Following this, an application for a development consent order will be submitted.

Retrieved from "https://www.designingbuildings.co.uk/wiki/Stonehenge_tunnel"
Create an article