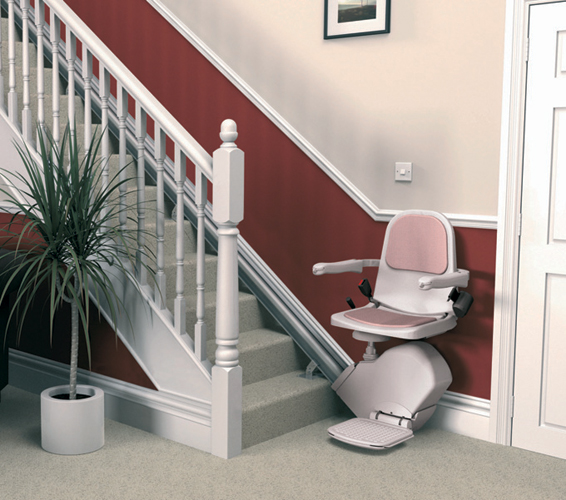 A stairlift is a mechanical lifting device commonly used in dwellings to lift people up and down staircases. It is sometimes referred to as a chairlift or stair glider. Stairlifts are typically are used by people with restricted mobility who are unable to safely navigate stairs without assistance.

Stairlifts generally consist of a rail mounted to the treads of the stairs, and a chair or lifting platform which moves up and down along the rail.

Stairlifts were first commercially produced in the USA in the 1930s, although there is evidence to suggest that an early incarnation of a chair being pulled up and down stairs dates back to King Henry VIII, who used one when recovering from a jousting accident.

Stairlifts are predominantly used indoors, although outdoor versions can sometimes be found on steps leading up to front or back doors. These differ in that they use weatherproof fabrics and durable parts that can be left exposed to the elements.

The most common type of stairlift involves a straight rail that runs up a domestic staircase. The rail is usually made from extruded aluminium or steel. The rails come in various cross-sections and, depending on their length, can weigh more than 30 kg. The rails are attached to the stair risers with metal brackets.

The carriage usually runs along the rail on small diameter rollers. Most stairlifts use a cable or chain pulley system, or a driving mechanism such as a rack and pinion system.

The carriages usually consist of a seat with arms and a footrest, although they can be adapted to suit the requirements of the user. Some carriages can consist of a platform without a seat base, which requires the user to stand/perch rather than sit.

The carriages are conventionally positioned at right angles to the rail, so the user travels ‘sidesaddle’ up and down the stairs. At the top, the seat swivels, through 45 or 90-degrees, allowing the user to disembark. The swivel action can be either manual or powered, depending on the requirements of the user.

The user can operate the stairlift by using a control positioned on the arm of the carriage. It is usually in the form of a switch or toggle-type lever.

[edit] How to install a stairlift

The stairlift may be anchored to the side of the stairs against the wall, which can be sturdier than the banister and railing side.

The first piece to be installed is the lower track which is laid along the length of the stairs. It is important to ensure that the track is laid evenly to prevent the carriage becoming stuck partway. Brackets are attached with screws to maintain the even level of the track.

Once the track is laid and bracketed to the wall, call box wiring is run under the track, often using clips to secure the wires underneath. Call boxes are secured in easily reachable places.

The upper track is then aligned above the lower track. The carriage seat base is placed between upper and lower track, and the second set of brackets is screw-fastened.

The chain and pulley mechanism is installed by feeding the chain through the track, half on the left and half on the right, along with the power cable for the carriage, which should move in conjunction with it.

The seat must then be assembled according to the size requirements of the user, with adjustments made after testing if necessary. The power cable is plugged into the end of the track and the electrical power supply.