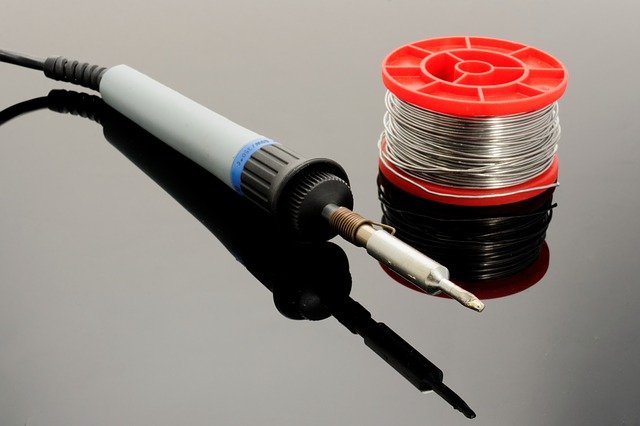 Soldering is a method of permanently joining or seaming together pieces of metal. It can be used to repair small holes in metal, assemble electronic components, join pipes and so on.

Heat is generally created by a soldering iron or blowtorch. The most common types of soldering irons are electrically powered, although there are some that can be heated in a fire. A propane blowtorch tends to be more effective at heating thick metal quickly. In some instances, a hot air gun can be used for soft soldering projects while a furnace can be used in hard soldering to heat the components until the solder melts.

There are other industrial soldering methods, including:

These are special alloys known as solder. Solder is available as rods, wires, strips, sheets or other forms. The type of solder used in the process must have a melting point that is lower than that of the metals being joined.

Soft solder is usually a mixture of lead and tin. Soft solder tends to use heat from a soldering iron or blowtorch. Soft solder is typically used for joining elements such as copper plumbing fittings.

Hard solders generally incorporate brass solders (such as copper-zinc alloys), silver solders, copper solders, nickel-silver solders, solders for light alloys and so on. Hard solder also uses heat from a soldering iron or blowtorch, but it can also use other sources of heat (such as a furnace).

Flux creates a chemical barrier to prevent the formation of oxides (which can impede the bonding process). There is liquid flux (referred to as corrosive or active flux) that must be washed away from the surface once the solder hardens and becomes solid. There is also passive flux, which is a paste that cannot be washed away entirely. Therefore, this method is primarily used for purposes (such as electrical connections or copper plumbing joints) where it can do a sufficient job of excluding oxide without requiring it to be dissolved entirely.

Some types of wire solder incorporate flux into their core.

Some of the most commonly found combinations of materials used in the standard soldering process are:

Brazing is a method of hard soldering that involves a copper-zinc alloy as the filler material and borax as the flux. Brazing requires extremely high temperatures (much higher than those created through soft soldering techniques).

Dip brazing is a technique in which metal is immersed in the molten jointing medium. It is widely used in industrial mass-production processes.

Retrieved from "https://www.designingbuildings.co.uk/wiki/Soldering"
Create an article