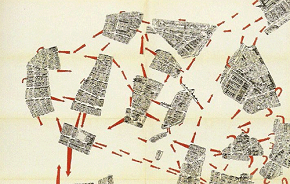 Psychogeography is an exploration of urban environments that examines their effect on the emotions and behaviour of people. It explores how different places impact upon people psychologically.

As a movement it emerged from the avant garde movement Lettrist International, with the commonly-cited originator being Ivan Chtcheglov who published an essay in 1953, ’Formulary for a New Urbanism’. For Chtcheglov, the derive (drift) was a new and exciting way to approach urban wandering.

As Chtcheglov wrote in ‘Formulary for a New Urbanism’:

‘Cities have a psychogeographical relief, with constant currents, fixed points and vortexes which strongly discourage entry into or exit from certain zones.’

The Marxist theorist Guy Debord is often credited with having done the most to popularise the theories of psychography. As a founding member of the Situationist International, Debord promoted the playful and creative aspect of the derive, inspired by the 19th century poet Charles Baudelaire and his concept of the flaneur (urban wanderer). In 1955, Debord defined psychography as:

‘The study of the precise laws and specific effects of the geographical environment, consciously organised or not, on the emotions and behaviour of individuals.’

By drifting across the urban environment, or adopting playful techniques such as overlaying a map of Paris with a map of Rome, Debord theorised that architecture and spaces could be explored and examined in revolutionary ways that were removed from the powerful capitalist ‘spectacle’.

Together, the Situationists – a movement of artists, writers, poets, and so on – sought to break down the barriers between culture and everyday life, which they believed had become ideologically and, in terms of architecture, physically restrictive.

In 1958, Debord defined the concept of the derive as:

‘In a dérive one or more persons during a certain period drop their usual motives for movement and action, their relations, their work and leisure activities, and let themselves be drawn by the attractions of the terrain and the encounters they find there… But the dérive includes both this letting go and its necessary contradiction: the domination of psychogeographical variations by the knowledge and calculation of their possibilities.’

During the 1960s and 70s, subversive political pranks began to form part of psychogeography, referred to as detournement (‘rerouting’ or ‘hijacking’). This involved turning expressions of the capitalist system and its media culture against itself, often involving the appropriation and distortion of slogans, logos, and other features of the urban environment.

In the 1990s, psychogeography was exposed to a wider audience when it was adopted as a field of study by a range of performance artists and literary figures.

Film makers such as Patrick Keiller (‘London’, ‘Robinson in Space’), and writers such as Iain Sinclair and Peter Ackroyd have become closely associated with psychography, with the core being a dissatisfaction with the nature and design of the contemporary urban environment.

Guy Debord – ‘The Society of the Spectacle’

This philosophical work introduces Debord’s concept of the ‘spectacle’ which he describes as being ‘not a collection of images, rather, it is a social relationship between people that is mediated by images’. It is also a stark critique of the emerging 1960s mass media landscape and commodity fetishism as well as urbanism.

Ackroyd’s approach to psychogeography is to focus on the ‘personality’ of place itself. By describing the ‘phrenology’ of the city, he attempts to define its character.

Iain Sinclair – ‘Lights out for the Territory’ and ‘London Orbital’

Sinclair’s career has largely been spent documenting London and its edgelands. In ‘London Orbital’ he describes a series of trips he took tracing the ‘acoustic footprint’ of the M25, London's outer-ring motorway, on foot.

A collection of essays and newspaper columns in which Self examines psychogeography on ‘airport walks’ – walking from his home to an airport and from the destination airport onwards.

Retrieved from "https://www.designingbuildings.co.uk/wiki/Psychogeography"
Create an article