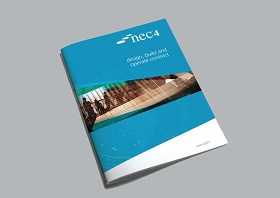 NEC4 brings a new addition to the NEC family of contracts: NEC4 Design, Build and Operate Contract (DBO), released in 2017. It has been added to the suite of contracts in response to the increasing demand for contracts extending into the operational phase.

The demand is coming both from UK clients and from international funding agencies, such as the World Bank and the Asian Development Bank (ADB). In 2015, ADB commissioned NEC to draft a consultative DBO contract, the feedback from which has helped to shape the NEC4 version.

It also aligns with the UK government's commitment to 'soft landings', in which designers and constructors are involved with projects at least three years after construction completion to ensure a smoother handover to the operator.

The new DBO contract is not only intended for the 'traditional' DBO approach, where the client requires a new facility or asset to be designed, constructed and then operated by a contractor. It is also available for situations where a client wants to have an existing facility or asset operated by the contractor while it is being upgraded or extended.

In such situations, the timing of the design and construction phase would normally be stated by the client, but may be determined by the contractor – which will undertake the work at a point to suit the performance requirements of the overall service.

The contract starts with the operational and service requirements of the client and then integrates the new or replacement asset to reflect the way that the operation has been specified.

Perhaps even more than other contracts, the development of the client's requirements and specification in the scope will be crucial to the understanding, use and success of the contract.

All the standard NEC provisions for communications, early warning and compensation events are retained along with some other features added in the NEC4 suite.

The management of the work through plans and programmes for the construction and operation phases are still important.

Recognising the greater involvement and responsibility of the DBO contractor in the operational phase, the contract has a lighter touch than some standard NEC design and build options.

A key issue for the client is identifying and incentivising performance and productivity of the total asset. This may be through any or all of the traditional NEC approaches, including the reduction of payments for poor performance.

The new DBO contract brings incentives and productivity options together into one schedule and requires the client to identify and develop the approaches it wishes to use.

This article was originally published here on 19 June 2017 by ICE. It was written by Ross Hayes, Richard Patterson and Barry Trebes, NEC4 drafters.

Retrieved from "https://www.designingbuildings.co.uk/wiki/NEC4_Design,_Build_and_Operate_Contract"
Create an article