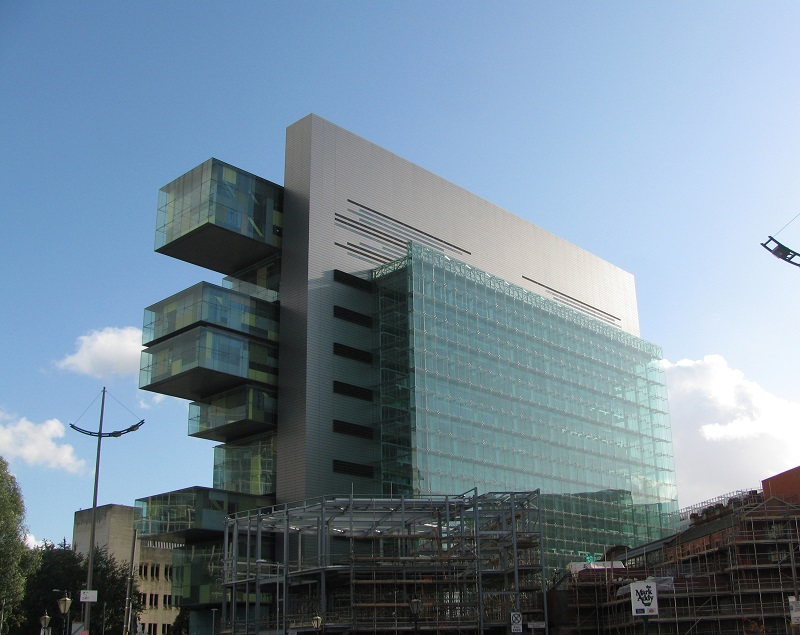 Manchester Civil Justice Centre is a court building in Manchester, England. Completed in 2007, it was the largest court building to be built in the UK since the Royal Courts of Justice in 1882.

Designed by Australian architects Denton Corker Marshall, it has been nicknamed ‘the filing cabinet’ because its cantilever floors extend over the lower levels at each end. The design draw inspiration from Expressionist architecture as well as the Futurist art movement of the 1920s which emphasised the use of dynamic lines.

The building comprises three vertical components of varying heights. The first is a 13-storey ‘finger’ block with long rectilinear forms, the second, a solid billet of steel circulation, and the third, a fully glazed atrium 60 x 60 m which is the largest of its kind in Europe. The design is intended to reinforce the idea that the judicial system is not concealed, but transparent and accessible.

The building attained a BREEAM Excellent rating, with its narrow, elongated form allowing for natural cross-ventilation, and natural lighting.

The building has been critically acclaimed, with Blueprint magazine calling it one of the ‘best British buildings of the 21st century’, and being nominated for RIBA’s Stirling Prize.

Retrieved from "https://www.designingbuildings.co.uk/wiki/Manchester_Civil_Justice_Centre"
Create an article