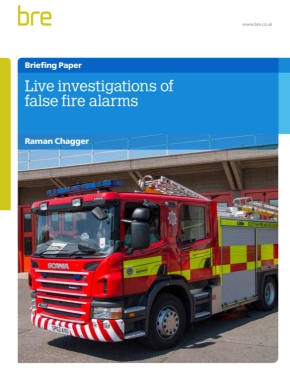 However, false alarms attribute to estimated losses of around £1 billion a year, resulting in disruption and loss of productivity for businesses. False alarms have the potential to divert fire and rescue services away from real fires, and also reduce the confidence of the general public in fire alarms. Despite this there is no single organisation responsible for investigating false alarms or providing guidance on reducing them.

Data from his accounts and from 65 false alarm reports, gathered from November 2014 to April 2015, were analysed and 35 recommendations were made. These can significantly reduce false alarm occurrences and contribute to the greater integrity and reliability of fire detection systems.

The recommendations were made across nine different stakeholder groups, ensuring that fire and rescue services, fire risk assessors, business owners, fire alarm contractors, trade associations and others can all play their part in collectively reducing false alarms in the UK.

The contents of the briefing paper are:

The free briefing paper can be downloaded at: https://files.bregroup.com/research/Live-Investigations-of-False-Alarms_2015-December.pdf

Retrieved from "https://www.designingbuildings.co.uk/wiki/Live_investigations_of_false_fire_alarms"
Create an article