This article originally appeared as “An air of elegance?” in Context 18, published by the Association of Conservation Officers (now The Institute of Historic Building Conservation) in Spring 1988. It was written by Brian Godward, Harrogate BC.

A recent (1988) report on economic prospects for the North of England identifies three places in Yorkshire and Humberside that have "all the characteristics that the much-vaunted southern boom towns have to offer'. This list of ‘Northern Lights' picks out Beverley, Thirsk and Harrogate. The authors state that such towns score particularly well in a 'quality of life' index designed to include, amongst others, Social and environmental factors.

This trio avoided the despoilations of the Industrial Revolution though all lie close to large cities. Further, they are urban focal points for affluent country districts, which have considerable attractions for the tourist and visitor. The 'odd one out’ is Harrogate, a planned Spa town with largely Victorian origins.

Harrogate has the special character of homogeneity brought about by its development over a relatively short period. There are strong urban forms of stone terraces, crescents and avenues set amid open landscaping with many mature trees. The town centre is confined in part, by the open Stray or ‘200 Acres', giving a clean urban edge to older Harrogate.

Much of the success of Harrogate as a shopping and tourist centre is derived from this special character of elegance created by buildings and related gardens. This ambience has traditionally attracted a wealth of small-scale speciality shopping, selling classic fashions, jewellery, art and antiques as well as the more contemporary designer fabrics and boutiques. These fit harmoniously into the Victorian or Edwardian fabric adding variety and vitality to the shopping scene.

The Borough Council have produced a Shopfronts Guide outlining basic design principles. This is available to the public and it is notable that, from recent experience in the town, fewer applications are being received involving standardised aluminium and plastic fronts. Conversely, it is pleasing to note that more applicants are coming forward with proposals for well designed, ‘bespoke' and traditionally based shopfronts. Design conscious multiples such as Laura Ashley, Next, Horne Bros., and 'K' Shoes have contributed good examples in James Street, reinforcing the argument that good quality in presentation will attract the customer. 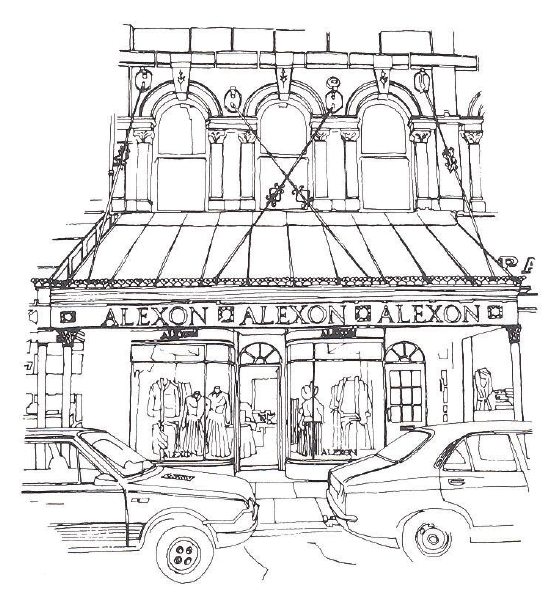 [James Street: A good example of a new shopfront and canopy well related to the original Victorian building. The house name is well in evidence whilst not being out of scale.]

The use of cast-iron and glazed canopies is traditional to Harrogate. They not only protect the shopper physically but extend the building into the street visually, thus unifying facades. One recent and significant example of a refurbishment to such is that at Betty's Cafe, Parliament Street. Betty's, based in several Yorkshire towns, are very much an institution and were awarded the prize for serving the ‘best cup of tea in England' in 1987. The attractive Harrogate tea-shop is set overlooking the floral gardens edging the Stray, and, in restoring and refurbishing the shopfront and canopy, Architects Greenwood and Nicholas renovated the delicate brackets, tracery and trelliswork together with high-class signs.

The very success of Harrogate has brought with it the usual development pressures. The town largely avoided the excesses of large-scale post-war commercial developments (though there is one regrettably prominent example!) but there are proposals in the pipeline for at least two major sites in the town centre. Much care will be needed to ensure that these do not erode the special character and ambience of the town. The economic bouyancy of Harrogate should be geared to securing the reinforcement of the fabric, together with the careful management of the existing building stock, so extending the quality of homogeneity. Then Harrogate might feature in a future ‘Northern Lights' survey as being ‘Top-Town'!

Retrieved from "https://www.designingbuildings.co.uk/wiki/Harrogate_in_1988"
Create an article