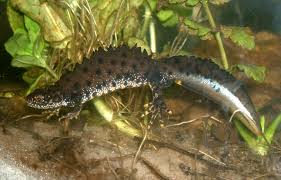 Great crested newts (Triturus cristatus) are the largest native newt species in Britain and are legally protected. They are widely distributed across lowland Great Britain, but absent from Ireland. Across Europe, numbers of great crested newts have declined, largely due to the loss of ponds and habitat deterioration. They spend a significant proportion of their time on land and return to waterbodies to breed in the spring.

The great crested newt is the largest of the three native species of newt and can grow up to 17cm in length. They are usually dark brown or black with a ‘warty’ or bumpy skin. Their underside is bright orange with black patches. The males develop a jagged crest along their backs in the spring with a white stripe. Females do not have a crest. Great crested newt larvae are mottled with black spots and have a long filament at the tip of their tail.

Great crested newts spend a large amount of time on land feeding, dispersing, resting and hibernating. From around late September to mid-October, when night temperatures drop, they enter hibernation until temperatures warm up again from early February.

The habitats great crested newts can be found in on land include:

From February until April/May, adults will move from their hibernation sites to their breeding ponds. Once they reach their ponds, they can breed between early March and the end of June (with seasonal variation). Females will lay large numbers of eggs within a waterbody, with each egg wrapped inside the leaves of pond plants.

Whilst great crested newts prefer to breed in small to medium sized ponds, they are also known to occur in other habitats including:

Great crested newts can travel large distances between breeding ponds and their resting places, and it is considered that they may be supported by land within 500m of a pond.

Due to the decline of the species across Europe, great crested newts are a European Protected Species. As such, they are protected by both European and UK legislation, meaning it is illegal to:

Any such offence could result in a prison sentence of up to 6 months and a £5,000 fine for each offence.

Situations where great crested newts could be present and therefore affected by works include:

The first stage of a survey is likely to determine the habitat suitability index score. This will help assess how likely it is that great crested newts will use the site. If this score finds that newts may be present, a more detailed set of surveys will be required. It is only generally possible to undertake newt surveys in waterbodies between mid-March and early June and between four and six visits will be required during that time.

If great crested newts are found to be present and are considered likely to be affected by the proposals, it may be necessary to obtain a protected species licence from Natural England, Natural Resources Wales or Scottish Natural Heritage in advance of works taking place. As part of the licence, a mitigation strategy will be required which will detail how impacts on newts and their habitats will be avoided or minimised wherever possible.

In August 2015, Natural England launched a pilot project in Surrey to bring more flexibility to the licensing system. The project aims to take a more strategic approach, ensuring that resources are focused on newt populations and habitat that will bring the greatest benefits, and making the licensing process more straightforward.

A local conservation plan will be prepared that will identify areas where development will have the least impact and specify where new habitats will be created, so that when development results in habitat loss, the habitat gains will already be in place to compensate. Ref Woking Borough Council 24 August 2015.

Woking borough council has been looking at the impact on newts at the same time as planning permission, removing the need for expensive surveys prior to building works and individual licences to disturb newts if they are present.

The three-year programme aims to survey areas where newts are most prevalent and map the potential impacts on development. Their habitats will be enhanced or created prior to any development taking place – saving developers time and money.

According to a report by the Financial Times in February 2017, EU laws protecting Britain’s great crested newts could be repealed to help speed up developments.

The FT said it has been told by government figures that the EU Habitats Directive is among measures to be repealed, citing the 'excessive' protection as a reason to change the law.

Removing the EU protection, which covers all 28 member states with a single standard, is expected to help developers wishing to build on newt habitats, although certain protections would still exist in UK law. The government’s Housing White Paper, published in February 2017, highlighted the fact that the species can stall urgent house building projects and increase costs.

Meanwhile, Natural England has been piloting a new approach for dealing with the protection of the species. Initially trialled with Woking borough council in Surrey, the new scheme is set to be rolled out across the country.

Housing and planning minister Gavin Barwell said: “This new approach to managing great crested newts will not only ensure the continued protection of this rare species and its habitat, but will safeguard developers from the delays, costs and uncertainty which have so often restricted the job of building new homes.”

In February 2020, Natural England rolled out a ‘strategic approach’ to great crested newt licensing across 37 local authorities to better protect the amphibian. The ‘District Level Licensing’ scheme works at a landscape rather than at site-by-site scale and uses conservation payments from developers to create new habitats in locations that will benefit the species. Ref https://www.gov.uk/government/news/innovative-scheme-to-conserve-newts-and-promote-sustainable-development-is-rolled-out-across-england

Retrieved from "https://www.designingbuildings.co.uk/wiki/Great_crested_newt_and_construction_works"
Create an article