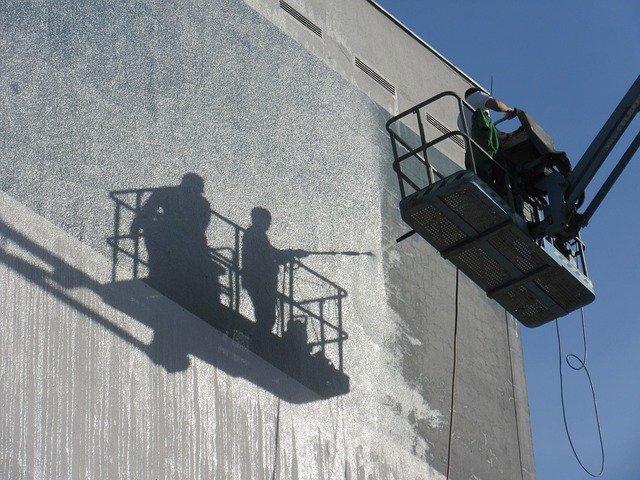 In its broadest sense, the term ‘facade’ can refer to any predominantly vertical face of a building envelope, such as an external wall. Consequently, a building may have more than one facade, such as the north facade, south facade and so on. Terraced buildings may only have two facades - a front facade and a rear facade.

Sometimes the term ‘facade’ is used to refer more specifically to external faces of buildings that have particular architectural emphasis, such as an imposing design, decoration, the main entrance to the building and so on. This will typically be the front of the building, facing onto a street or other public open space, but it may also be other faces depending on their architectural treatment and importance.

Building facades should be cleared of pollutants, grime, stains and unsightly marks on a regular basis. A clean facade can not only have a positive impact on public impression, it can also help attract or retain tenants and make a positive contribution to the surrounding neighbourhood.

Regular facade cleaning may reveal areas of the structure that have been affected by - or are vulnerable to - other types of problems. For instance, removing a seedling during the cleaning process can serve as a proactive measure that will prevent invasive root growth that could damage the facade (or even contribute to some form of structural failure). Removing dirt and stains may also reveal other structural vulnerabilities. Identifying these problems in their early stages may help building owners avoid more significant problems in the future.

[edit] How to clean facades

Generally, facade cleaning methods are water based. This conservative approach to removing typical dirt and grime includes pressure washing, soaking, and steam heat washing. However, in some instances, methods may include chemical treatments, sand blasting and so on and may involve scaffolding, protective sheeting and so on.

Building facades are made from different materials, such as stone, wood, glass, aluminium, stainless steel and so on. The type of material will dictate the cleaning method as will the building’s location (which influences weather related facade degradation). The building’s function may also be a factor.

While stone may appear invulnerable in its natural form, when incorporated into a building facade its appearance can become significantly compromised by both natural and chemical pollutants. Cleaning stone facades can require special knowledge, since incorrect methods can cause irreparable damage.

Ideally, stone facades should be cleared in advance of any dirt that builds up. This means special attention should be paid to damp areas on the stone. Simple cleaning solutions can include vinegar, dish soap and warm water. Tools can include a sponge, soft brush or rotary tool fixed with a buffing device.

Timber facades should be cleared of any natural growth (such as moss or algae) that has accumulated. It can then generally be cleaned with a simple solution of dish soap and warm water. Tools can include a sponge and soft brush to apply the solution, which is then rinsed with clean water.

[edit] When to clean facades

Cleaning a facade should be part of a larger maintenance programme. It should also be part of the early investigation process before any facade repairs take place. A clear facade, free of dirt, stains or other unwanted materials will provide a better surface for restoration work and will make problems easier to identify.

[edit] Who should clean facades?

In some situations, small scale facade cleaning can be undertaken by facilities and maintenance staff. This will require the proper skills and equipment, particularly when working at height. For larger facade cleaning projects, it may be necessary to hire an expert who has both the knowledge and equipment - such as pressure washers and scaffolding - to do the job safely and effectively.

Retrieved from "https://www.designingbuildings.co.uk/wiki/Facade_cleaning"
Create an article