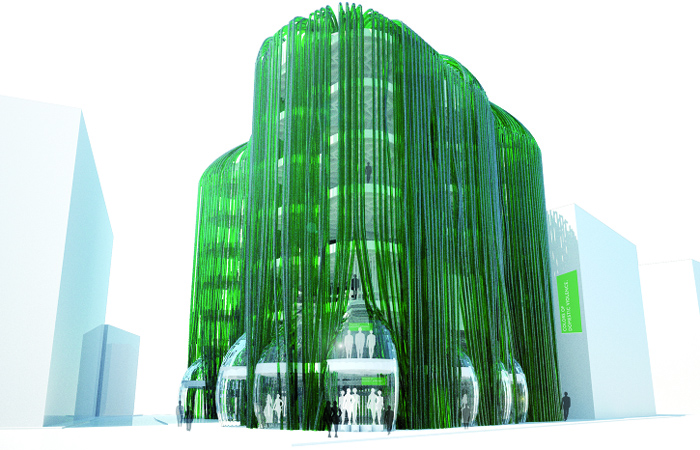 There is lots of talk about green buildings, but what if they were actually green?

The Folly is made of ethylene tetrafluoroethylene (ETFE), a transparent plastic material. Its hollow interior is filled with water and spirulina, a type of algae often used as a dietary supplement. The growth of the algae depends on sunlight and temperature.

Algae and other marine plants make 70% of the world’s oxygen. The Folly produces about 4.4 pounds of oxygen per day and can also suck about 8.8 pounds of carbon dioxide from the air per day. This is compared with a tree which absorbs only about .132 pounds.

Algae has also been used in a number of other recent urban innovations. French biochemist Pierre Calleja created a prototype for a 'smog-eating' street lamp, which uses bioluminescent microalgae to light streets while absorbing carbon dioxide and producing oxygen.

This article was originally published as 'A cloak of algae' by BRE Buzz on 13 Sept 2016 written by Sheila Swan.

Retrieved from "https://www.designingbuildings.co.uk/wiki/Algae"
Create an article