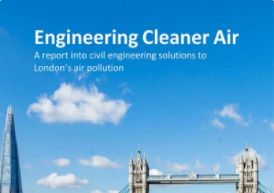 The report calls for an increase in pedestrianised routes, and how this could be managed to ensure pollution does not simply spill over onto neighbouring streets.

It also highlights the use of new technologies to boost air quality, calling on London to become a world leader in electric vehicle usage and adopt new methods of monitoring air quality on the Underground.

The taskforce was set up to look at what civil engineers can do to help reduce London's poor air quality across transport, planning, water infrastructure, technology and industry practices.

To support these aims, the report calls for:

At the launch event the audience heard from a panel of speakers including Simon Birkett from the Campaign for Clean Air in London on the need to think ahead and what civil engineers can do now to tackle air quality issues.

Outlining the key points from the report, Heleni Pantelidou, Associate Director, Arup, highlighted the report's call to use new technologies to boost air quality, calling on London to become a world leader in electric vehicle usage and adopt new methods of monitoring air quality on the Underground.

There was general agreement that the industry as a whole had responded well on safety concerns but health aspects had been ignored.

The report has the backing of the Considerate Constructors Scheme. Chief Executive Edward Hardy announced plans to monitor air pollution at over 3,500 sites, companies and suppliers each year in the capital alone.

Commenting on the launch of the report, Professor Hansford said:

"The civil engineering industry has a significant role to play in reducing air pollution, helping to improve air quality for all residents and visitors in London.

"Whilst our report focuses on London it can act as a blueprint for urban areas across the UK and around the world. This report should spur the action required by both policy makers and industry to make poor air quality an issue of the past."

This article was originally published here on 11th October 2017 by ICE. It was written by James Sloan.

The Institution of Civil Engineers managed to write a report about improving air quality in London with a lot of focus on electric vehicles and only a small mention of reducing motor traffic (freight vehicle consolidation centres) and omitting cycling from their main findings.

This is missing a point which has been made by government advisers and experts that switching to electric vehicles will not solve air pollution unless we have significant motor traffic reduction: https://www.theguardian.com/environment/2017/aug/04/fewer-cars-not-electric-cars-beat-air-pollution-says-top-uk-adviser-prof-frank-kelly

Electric vehicles have the same problems of tyre and brake dust as standard cars, which causes a significant amount of particulate pollution in London for which there is no safe limit.

Apparently the possibility of getting 10% of people on to vehicles with no emissions (bikes!), and where the health benefits directly address some of the problems caused by pollution, isn't worth mentioning. This seems to ignore the current mayor's Healthy Streets agenda and the work done by the previous mayor on cycling.