How we interpret the built environment is very much a personal matter – visually, socially, politically or artistically. But doing so using maps – as opposed to using them for traditional wayfinding – can be seen as a new, and not so predictable take. It is therefore refreshing for maps to have been the subject of an architectural installation at The Building Centre in London (June 3 – August 30, 2019).

According to the exhibition’s promotional blurb:

“Maps delineate space and can both conceive and compound geographical, cultural, political and social boundaries as a physical manifestation in the built environment. Often used as a drawing tool, maps can be conflated with plans – neutral forms of data representation that simplify the interrelation of time, space and experience in place-making to a singular vision.”

So, engaging with maps and plans in this way is designed to give us new ways of reimagining our environments and different ways of representing space, understanding our world and hopefully engendering new design possibilities. It is this notion of conflating maps and plans that distinguishes the exhibition and makes the displays memorable, revealing and, intriguing – the viewer feels compelled to explore every line, shape and concept before reluctantly moving on to the next exhibit. 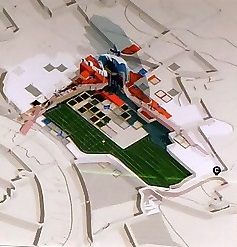 This is a speculative design proposal for an environmental proving ground of landscape and architectural installations designed to prepare the island for anticipated social and climate change impacts. The 1:20 model village is intended to “see, experience, measure, analyse and enjoy the landscape, bridging the gap between research and local user groups”.

Looking at the exhibits, it is a wonder why this line of thought has taken so long to materialise. The precise, ordered drawings of Sheerness boating lake, the Mount, and South Lees Solar Hedge offer the viewer a gateway into environmental reinterpretations with multiple, inherent design possibilities.

In particular, South Lees Solar Hedge is an imaginative reinterpretation of that mainstay of the British countryside – the humble hedgerow. Here, Smout Allen re-envisages hedgerows as solar structures, introducing an industrial tempo to an otherwise unremarkable pastoral environment and mimicking the recent growth of solar installations among many UK farmers. 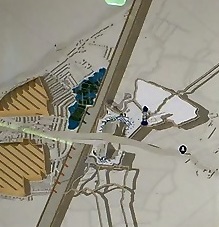 ScanLAB’s Projects’ concept sees autonomous vehicles as the cartographers of the future.

“Mapping the world has traditionally been in the hands of ‘qualified experts’ from ‘trusted organisations’ (e.g Ordnance Survey and USGS); it is now in the hands of billions of corporately-deployed machines.”

ScanLab’s ‘Dream Life of Driverless Cars’ explores the results of a 3D laser scanner winding through the streets of London in a bid to discover how autonomous vehicles might perceive – and misperceive – the world. The steady but unrelenting trips of the AVs will continually re-map and update accepted 3-D models of the city. While the aim is seen as practical and laudable in helping to make our cities safer and more navigable, ScanLab also highlights the potential use and misuse of data that this approach might involve.

Past exhibitions at The Building Centre have been curated to inform, provoke and inspire. Contemporary Cartography is no exception to this tradition. On multiple levels it does not disappoint – being visually, conceptually and intellectually alluring and stimulating, and all the more impressive for its arrangement over such a compact space.

Retrieved from "https://www.designingbuildings.co.uk/wiki/Contemporary_Cartography_exhibition"
Create an article