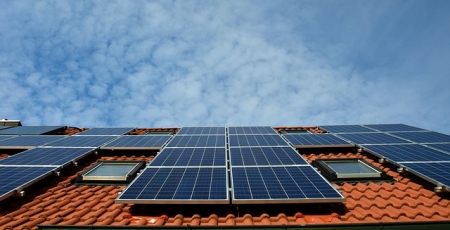 Net zero energy, zero carbon, carbon neutral, carbon positive: some increasingly popular terms in building design. But do we really know what each of them means and how they contribute to our roadmap to a post-carbon UK economy?

Carbon neutral (or net zero carbon) refers to a building where all carbon emissions associated with operational energy demands of the building are offset by renewable energy provision, either on- or off-site.

Zero carbon is used to refer to a building where its operation does not lead to any carbon emissions. This would essentially be a building that could operate off-grid, generating sufficient energy from building-integrated renewable sources and combining this with battery and thermal storage to enable operation at times of no renewable energy production.

The term ‘Zero Carbon’ has also, arguably, been incorrectly used in the London Plan. There, zero carbon, actually refers to achieving carbon neutrality of regulated emissions only (space heating, hot water, cooling, lighting and auxiliary energy). In addition, offset payments are allowed as part of the strategy to deliver ‘zero carbon’.

Carbon positive buildings go beyond zero carbon and produce more energy than they need, with carbon emissions from the building’s operational energy consumption being less than the carbon emissions off-set by renewable energy generation. A carbon positive development could also effectively assist with energy demand management, interacting with the grid, electric vehicles and batteries to reduce peak energy demand, and, thereby, grid demand.

Previously, the government’s ‘Zero carbon homes’ policy introduced in 2006 required all homes to be net zero carbon from 2016 and included all operational building emissions (both regulated and unregulated). Following the exclusion of unregulated energy from the ‘Zero carbon’ definition in 2011, the policy was finally scrapped in 2015, to the great disappointment of environmentalists, sustainability leaders and global thinkers.

The London Plan is currently leading the drive for low carbon construction in the UK and requires new major developments in London to be net zero carbon (aka carbon neutral). However, this is translated into a minimum on-site carbon reduction of 35% over Building Regulations, allowing the residual 65% of emissions to be off-set via a financial contribution to the borough.

Nevertheless, carbon neutrality is deemed the ‘easy way out’, the not-so-desirable substitute for zero carbon. The building still releases carbon emissions into the atmosphere, even if carbon savings delivered elsewhere through off-set payments could be robustly demonstrated.

It should also be noted that none of the above definitions currently deal with embodied carbon, the carbon associated to extraction, manufacturing and transport of building materials, the construction process, and the emissions from deconstructing and disposing at the end of the building’s lifetime. So, even if the UK construction industry were delivering net zero carbon buildings, we would still have a carbon problem.

[edit] Where do we need to be?

Zero carbon is currently regarded as the best practice and must be the aspirational target for new buildings if we are to keep global temperature increases to below 2 degrees.

When zero carbon becomes the norm, carbon positive dwellings will play a crucial role in tackling climate change and global warming, with buildings potentially being capable of making up for the carbon stemming from personal activities such as transport, food, goods purchasing etc.

Inevitably there are many more labels for low carbon and sustainable developments; whole life carbon positive, climate neutral, climate positive, positive development are all terms that require us to take a step back, see the bigger picture and understand the potential of buildings to contribute to ecological restoration, social justice and financial growth.

Retrieved from "https://www.designingbuildings.co.uk/wiki/Carbon_ratings_for_buildings"
Create an article