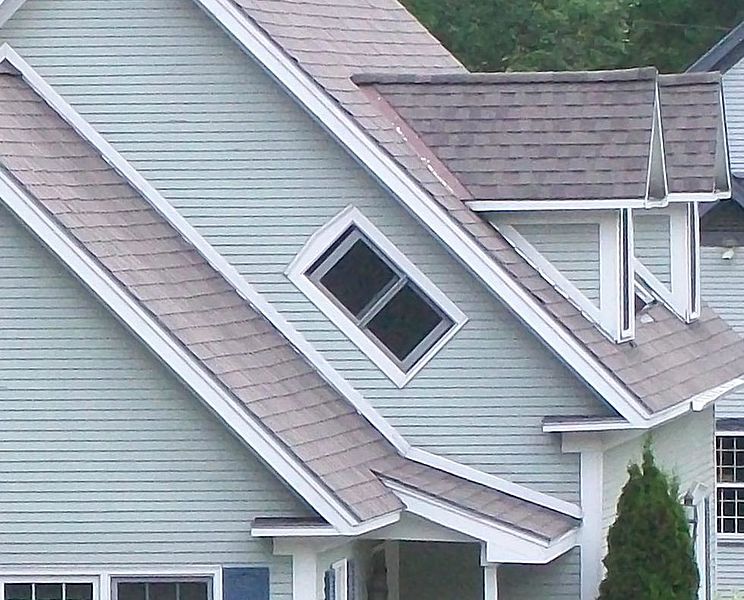 In the United States, witch windows (also known as coffin windows, Vermont windows, sideways windows or lazy windows) are found on Vermont homes and farmhouses, primarily on structures built in the 19th century, but also sometimes on modern homes.

[edit] What is a witch window?

A witch window is placed in a very small space where a traditional window could not fit if it were installed in its typical vertical orientation. The witch window is rotated to run parallel to the roof slope.

Witch windows can be double hung sash windows or single sided casement windows installed into the gable end of a house. This allows the installer to fit a standard sized window - rather than a custom window - into a very narrow space.

This type of window was typically installed in a wall during a home expansion project, often to accomplish repurpose a salvageable window that might be otherwise obscured or disposed of as a result of the renovation.

Witch windows were most often situated under the eaves of a roof to improve an upper level room or passageway without breaking through the roof to create a dormer window.

One notable drawback to the witch window is that it can make it difficult to fix siding around the outside wall where the window is located. Unless the siding is oriented in the same diagonal direction as the window (pictured above), it will create a problem with cutting the siding and waterproofing the wall around the window.

There are urban legends associated with the names given to these diagonal windows. The first has to do with witches’ broomsticks and the second has to do with the transportation of coffins.

The meaning behind witch window is linked to the mode of transport associated with witches - the broom. Superstition has it that witches could not fly their brooms at an angle, thereby making the witch window - and the rest of the building - witch proof. (Why the witches couldn’t fly through other windows and doors is another matter, but perhaps this is the reason why urban legends are urban legends.)

The term coffin window is equally spurious. The belief is that these windows were installed in order to make it easier to remove a coffin from an upper floor of the house (which was often where a bedroom would be located). The idea was that it would be safer to remove the coffin by passing it through the strategically positioned window rather than by carrying it down a narrow staircase. Logic fails here as well, since the simpler solution would be to keep the coffin downstairs and simply carry the body of the deceased person down. There may be some superstition or taboo associated with carrying a corpse down a staircase, but the true reason for this name is not known.

Retrieved from "https://www.designingbuildings.co.uk/wiki/Witch_window"
Create an article