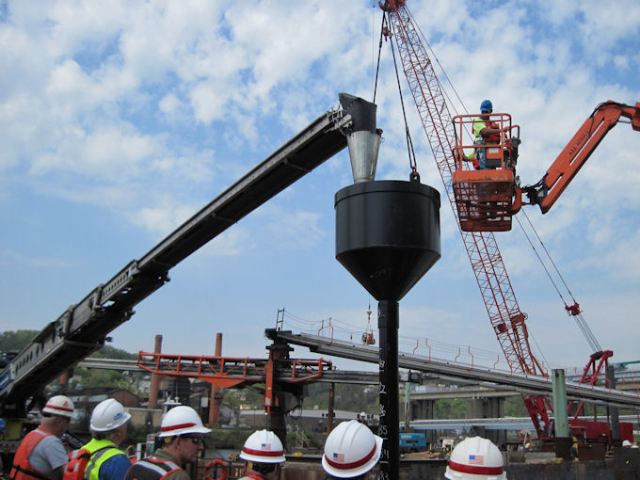 A tremie is a pipe that can be used for pouring concrete below ground level, often underwater. Common applications include piling works, basements, diaphragm walls, caissons, underwater foundations, and so on.

A tremie is made of rigid metal or plastic tubes, generally with a diameter ranging from 20 - 30 cm. At the head of the tremie pipe is a feed hopper into which concrete is placed. The use of a tremie helps avoid cement washing out of the mix while flowing, and so produces a more reliable strength concrete. Concrete intended for tremie placement should have a very high slump of approximately 150 - 200 mm.

The process begins by lowering a tremie pipe to the point where the concrete is going to be placed. It is important to keep air and water out of the tremie during this placement which is achieved by keeping it full of concrete. A pig, or foam rubber plug, can be used which is forced down the inside of the tremie by the concrete, displacing the water as it does so. The pig is pushed out of the bottom of the tremie and floats to the surface.

The lower end of the tremie should be buried in the mass of concrete as it flows out, as this limits the washing out of cement from the fresh concrete and prevents aggregate segregation. The concrete should be poured into the hopper continuously at a sufficient rate to avoid it setting in the tremie and, if necessary, admixtures can be used to alter the curing time, workability, slump, and so on.

The end of the tremie should be immersed by approximately 3 feet, and as the mix flows out towards the edges and builds up this will generally raise the tremie automatically, although it should be raised manually if necessary. Care should be taken not to raise the tremie to the extent that it breaks out of the freshly poured concrete as this would expose the bottom end to water.

However, if the tremie needs to be moved laterally it is recommended that it is lifted out vertically, plugged, and a new pour started at the new position as opposed to dragging the tremie through the concrete.

Several tremies should be used simultaneously if the pour area is too large for just one to be used and moved around. Tremies should be spaced 3.5 - 5 m apart and around 2.5 m from the formwork. By providing a continuous concrete flow through the tremies, a moderately even surface can be maintained and the risk of uneven setting can be minimised.

Retrieved from "https://www.designingbuildings.co.uk/wiki/Tremie"
Create an article