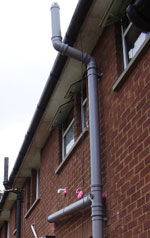 A soil vent pipe (SVP), also known as a soil stack pipe, drain-waste-vent or ventilated discharge pipe, is typically a vertical pipe that removes sewage and greywater from a building. It is often attached to the exterior of a building (although it may be fitted internally) and connects the subterranean drainage system to a point just above the level of the roof gutter.

Soil vent pipes allow the removal of waste from toilets, showers, baths and sinks, while also allowing odours to be released above the building, via a stack vent, at a level that will not cause a nuisance. The pipe’s vents also allow air into the internal drainage system so as to facilitate the process of aerobic sewage digestion, preventing a siphoning affect from occurring, and allowing free flow by gravity.

SVPs must maintain sufficient downward slope along their length to keep liquids and entrained solids flowing freely towards the drain. If a downward slope is not possible, a collection pit with a ‘sewage ejector’ pump can be installed.

Traditionally, soil vent pipes were made from cast iron; however, today they are most commonly made from uPVC.

Approved document H: Drainage and waste disposal requires that the foot of a discharge stack should have as large a radius as possible, and not less than 200 mm at the centre line. Offsets should be avoided in the wet section of the stack. Ventilating pipes should finish at least 900 mm above any opening within 3 m and should be finished with a wire cage or other perforated cover.

Retrieved from "https://www.designingbuildings.co.uk/wiki/Soil_vent_pipe"
Create an article