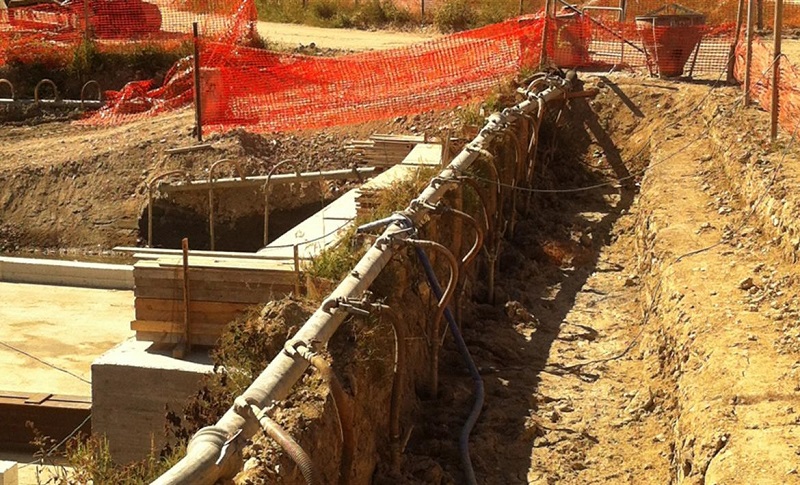 A wellpoint, also known as a drive point, is a small diameter well used for dewatering. It consists of a shallow shaft, a dewatering pump to draw water, a riser pipe which connects the wellpoint to the surface, and a small ‘well’ that fills up.

The riser pipes tend to be around 38-50 mm in diameter, with slots or openings at the bottom which enable water to be drawn up using the pump. The size of the openings is determined by the relative grain size of the water-bearing formation material. The openings should be large enough to allow water to enter the tube, but small enough to keep the water-bearing formation in place.

Wellpoints are fairly versatile and can be used for a wide range of applications. They are suitable for shallow foundations and trench works, particularly for long pipeline trenches where wellpoints may be installed in parallel by special trenching machines.

They can also be used for the irrigation of small to medium-sized residential gardens. If the water yield from one well is not sufficient for running an irrigation system, a second can be installed and connected to the first, enabling them to operate as one system.

They can also be used around the perimeter of excavations as an alternative to boreholes, as a means of lowering and controlling groundwater levels. They can be more cost- and time-efficient than a borehole due to the shallower depths required. In appropriate ground conditions, a wellpoint system can be installed very quickly. Traditional drilling techniques, such as jetting or auguring are typically used for installation.

Wellpoints tend not to yield large quantities of water – around 5 gallons per minute is typical. There is generally a limit of about 5-6 m in height over which water can be drawn as the vacuum is limited in practice to 0 bar. However, a second stage of wellpoints can be installed at a lower level if greater depths are required. They are capable of dealing with very low flows in silty sands as well as much larger flows in coarse sands and gravel.

Some of the benefits of using wellpoints include:

Retrieved from "https://www.designingbuildings.co.uk/wiki/Wellpoint"
Create an article