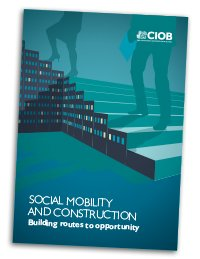 On 19 December 2016, the Chartered Institute of Building (CIOB) published a report highlighting the critical role construction plays in reversing declining levels of economic and social mobility in the UK.

Social Mobility and Construction: Building Routes to Opportunity suggests the construction sector is one of the few sectors that still employs a large number of traditional-skilled trades, roles that often lead onto more managerial positions. According to the report: ‘Construction in the UK now accounts for a third of all employment in this occupation group and a greater proportion of new job opportunities.’

The report calls on the government to help champion the UK as a world leader in construction excellence.

The survey of 1,094 working adults was undertaken by ComRes in August 2016 to gather views on aspects relating to social and economic mobility. Construction was ranked third, behind professional and scientific, and banking, as the industries that would do most to help poorer people improve their economic status.

However, the survey found that construction was seen as less effective at promoting social status; reflecting perhaps the poor image of the industry that persists with the public-at-large.

The report makes a list of recommendations for business, industry, professional bodies and government:

“Social mobility is fast becoming one of the defining issues of our time. I joined the construction industry at 18 as a management trainee with a construction company; I went on to gain a post-graduate qualification through advice from my professional body. I now sit here as President of the CIOB. I never thought I’d be in the position I am today but stories such as mine show the quality of opportunity that exists in construction.”

Retrieved from "https://www.designingbuildings.co.uk/wiki/Social_mobility_and_construction:_Building_routes_to_opportunity"
Create an article