Radon protection for new large buildings (GG 75 revised) was written by Chris Scivyer and published by BRE on 13 January 2015. 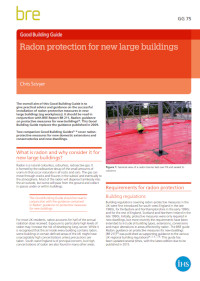 Radon is a natural, colourless, odourless, radioactive gas formed by the radioactive decay of the small amounts of uranium that occur naturally in all rocks and soils. It can move through cracks and fissures in the subsoil and eventually to the atmosphere. Most of this radon will disperse harmlessly, but some will collect in spaces under or within buildings.

For most UK residents, radon accounts for half the annual radiation they receive. Exposure to particularly high levels of radon may increase the risk of developing lung cancer. While it is recognised that the air inside every building contains radon, some buildings in certain areas of the UK might have unacceptably high concentrations unless precautions are taken. South-west England is of principal concern, but high concentrations of radon are also found in other areas.

Building regulations covering radon-protective measures in the UK were first introduced for south-west England in the late 1980s, for Derbyshire and Northamptonshire in the early 1990s and for the rest of England, Scotland and Northern Ireland in the late 1990s. Initially, protective measures were only required in new dwellings, but more recently the requirements have been extended to include all building types, extensions, conversions and major alterations in areas affected by radon.

This 8-page Good Building Guide gives practical advice about the installation of radon-protective measures in new large buildings (eg workplaces). It replaces the guidance published in 2009 and should be read in conjunction with BRE Report BR 211, Radon: guidance on protective measures for new buildings.

Retrieved from "https://www.designingbuildings.co.uk/wiki/Radon_protection_for_new_large_buildings_GG_75"
Create an article