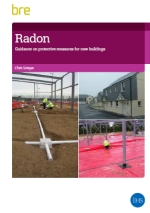 BR 211 provides guidance for reducing the concentration of radon in new buildings, extensions, conversions, and refurbishment projects, and so reducing the risk of occupants being exposed to it. It is intended for use in England, Wales, Scotland and Northern Ireland, and supports building regulations for England, Wales and Northern Ireland, and building standards for Scotland.

It was originally published in 1991 and was subsequently amended in 1992, 1999 and 2007. The 2015 edition replaces previous editions and two earlier guidance documents:

Retrieved from "https://www.designingbuildings.co.uk/wiki/Radon:_Guidance_on_protective_measures_for_new_buildings_BR_211"
Create an article