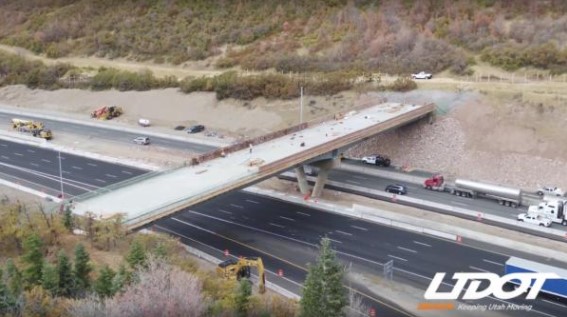 A green bridge (also known as a wildlife crossing) allows the safe passage of wildlife over infrastructure such as railway lines and roads.

In December 2018, the Utah Department of Transportation (UDOT) announced plans for one of the largest wildlife overpasses in the United States. The structure was completed in 2019. It is 110 metres long, 15 metres wide and crosses six lanes of Interstate 80 (I-80). It is the second wildlife overpass in the state of Utah.

Funding for the Parley’s Canyon crossing came from a £3.7 million grant for the protection of migration paths for moose, elk, raccoons, deer and other native wildlife that might be displaced or endangered by the road.

The idea for the crossing was first proposed in 2016 by Save People Save Wildlife, an animal advocacy organisation. The UDOT worked with the Utah Division of Wildlife Resources to determine which part of the road might be most dangerous for wildlife. One particular area of the I-80 roadway (known as Slaughter Row) had a high number of animal/traffic collisions and this was selected as the most suitable spot for the wildlife overpass.

The design project was undertaken by WSP USA on behalf of the Utah Department of Transportation (UDOT), the Utah Division of Wildlife Resources (DWR), Salt Lake City, Salt Lake County and Summit County. WSP provided structural engineering as well as support for civil and geotechnical engineering and landscape architecture.

Preliminary design began in January 2017, with construction starting in early 2018. The final landscape boulder was placed on the bridge during a December 2019 ceremony which marked the official opening. That was the last time people were permitted to walk across the overpass.

Since it is used for wildlife rather than highway traffic, the bridge was constructed based on its ability to support the weight of snow. Consideration was given to the types of vegetation approaching the bridge, opting for landscape that resembles the surrounding habitat and angular rocks and logs that are common to the region. However it was difficult to anticipate whether or not animals would be willing to make the crossing over the noise and disturbance caused by the traffic below.

Wildlife fencing was installed along the highway corridor to prevent wildlife from entering the road and to 'train' animals to use the overpass.

Original estimates anticipated a two- to three-year adjustment period before animals would begin to use the bridge. However, on 19 November 2020, the Utah Division of Wildlife Resources released a video that suggests the projections for adoption were too conservative. The video, posted on Facebook, captures moose, deer, black bears and elk using the bridge to cross the highway. A video taken at night shows a bobcat carrying another small mammal in its mouth. Another video shows a log being used as a scratching post by a big cat.

Retrieved from "https://www.designingbuildings.co.uk/wiki/Parleys_Canyon_Wildlife_Bridge"
Create an article