The London Borough of Wandsworth promoted an international, multi-disciplined competition for the design of a pedestrian and cycle bridge across the Thames which will link Nine Elms on the south bank to Pimlico on the north. The proposed budget is £40m, of which some £26m has already been raised.

The public was involved in the selection process and a jury panel established, chaired by Graham Stirk of Rogers, Stirk Harbour and Partners (RSHP).

The bridge is required to be 150 m open span (minimum) and 10.96 m height (minimum) above ordinance datum so as not to impact on river traffic.

Several options are being considered for the location of the bridge and the final location will not be agreed until Stage 2 of the competition.

Stage 1 of the competition asked for two A2 size boards to be submitted by mid-February 2015.

Board 1 was to be a mixture of words, diagrams and sketches showing:

Board 2 was to be a single image without words showing what the bridge will look like from the river or shoreline.

74 schemes were submitted. Have a look at the entries by clicking on the image below.

The four shortlisted schemes invited to take part in the next stage of the competition were:

Click on the image below to see the shortlisted entries. 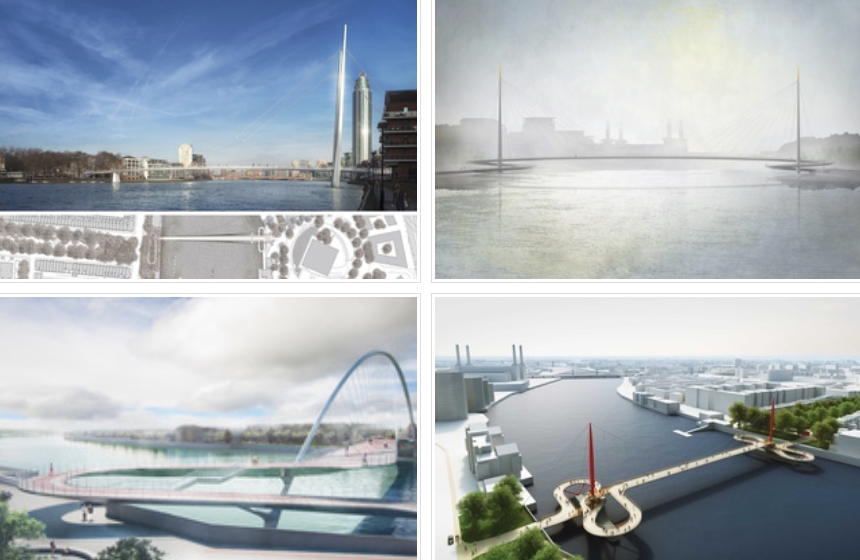 In November 2015, it was announced that the scheme by team 025 had won the competition: Bystrup Architecture Design and Engineering with Robin Snell & Partners, Sven Ole Hansen ApS, Aarsleff and ÅF Lighting.

Erik Bystrup said, "From the outset we wanted to design an elegant bridge that provided simple and uninhibited access for all, with minimal impact landings on each bank... We are very excited that this will be the first shared pedestrian and cycle bridge over the Thames, adding to the rich history of London's river crossings".

In December 2015, The GMB union called on TFL to scrap plans for the bridge, which is expected to cost £40 million, some of which will be publicly funded. GMB pointed out that the proposed location for the bridge is only 350 yards from the existing Vauxhall bridge and suggested that there were more important priorities for public money. 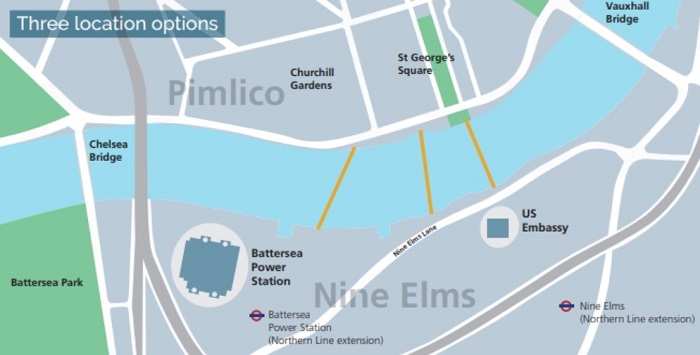 A location appraisal report exploring the pros and cons of each landing spot was unable to identify a single location that ‘delivers benefits without significant challenges’. It added, ‘the eventual selection will be about balancing the benefits against any harms that may arise.’

Public exhibitions are to be held in early-November 2018 as part of the consultation to find the best location ahead of a final recommendation to Wandsworth in 2019.

Retrieved from "https://www.designingbuildings.co.uk/wiki/Nine_Elms_to_Pimlico_bridge"
Create an article