'Never Waste A Good Crisis - A Challenge To The UK Construction Industry’ was written by by Andrew Wolstenholme of Balfour Beatty Management for Constructing Excellence and published in October 2009. 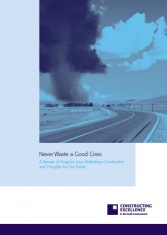 Constructing Excellence (CE) describes itself as ‘…the single organisation charged with driving the change agenda in construction. We exist to improve industry performance in order to produce a better built environment. We are a cross-sector, cross-supply chain, member led organisation operating for the good of industry and its stakeholders.’ It was one of a number of cross-industry bodies established to drive change in response to the Latham Report (Constructing the Team 1994) and the Egan Report (Rethinking Construction 1998) which concluded that ‘the industry as a whole is under-achieving’, and called for dramatic improvements.

'Never Waste A Good Crisis', written during the worst depths of the credit crunch was intended to assess the progress that the industry has made since Rethinking Construction in 1998 and to set out a series of further improvements that could be made over the next ten years.

However, in May 2008, Sir John Egan stated that ‘we have to say we’ve got pretty patchy results. And certainly nowhere near the improvement we could have achieved, or that I expected to achieve…..I guess if I were giving marks out of 10 after 10 years I’d probably only give the industry about four out of 10’ ref Egan: I’d give construction about 4 of 10.

Similarly, Never Waste A Good Crisis found that there was still a long way to go and that simply hoping the industry would improve as the economy recovered would miss a great opportunity, with Egan stating in the Foreword to the report, ‘Since 1998 we could have had a revolution and what we've achieved so far is a bit of improvement.’

Wolstenholme concluded that ‘Few of the Egan targets has been met in full, while most have fallen considerably short. Where improvement has been achieved, too often the commitment to Egan's principles has been skin-deep. In some sectors, such as housing, construction simply does not matter, because there is such limited understanding of how value can be created through the construction process.’

The report found that whilst there was a better understanding of value, quality and whole-life costing, and more widespread adoption of collaborative practices, there was a tendency to only adopt best practice on flagship projects. There was less uptake amongst the wider industry and little evidence of practices filtering down through the supply chain. It was found that less than half of the respondents to a CE survey believed the projects they worked were completed to time and to budget.

The report identified blocks to change, including ‘business models based on short term cycles, a fragmented industry, poor integration in the supply chain, and a lack of strategic commitment at senior management and Government levels’.

It suggested that a better understanding of value was still needed and that clients had to move away from just considering building cost, and putting downward pressure on the relatively small costs of design. It stated that ‘we believe that the era of client-led change is over, at least for the moment, and that it is now time for the supply side to demonstrate how it can create additional economic social and environmental value through innovation, collaboration and integrated working.’

It recommended better training across the industry and that industry bodies and professional associations should collaborate to represent the industry more effectively.

The also report proposed that one of the greatest challenges to the industry was delivering a low-carbon built environment.

Retrieved from "https://www.designingbuildings.co.uk/wiki/Never_Waste_A_Good_Crisis_-_A_Challenge_To_The_UK_Construction_Industry"
Create an article