Despite dynamic progress on renewables in many other heating markets, gas boilers still remain the most prominent product in the industrial segment.

The use of ground to water, water to water heat pumps and energy from waste heat is growing, and they are increasingly becoming installed in a primary system. However, gas and to a lesser extent, oil or biomass boilers are used most often as a secondary source for a backup system to either provide an operational safety related redundancy level or to support the peak load demand.

Gas boilers still benefit from lower investment cost, and even though technologies that use renewable energy sources are increasing their penetration in the industrial segment, current research supports the view that gas boilers will keep playing a significant role in the market in the next decade.

China, with its nearly 50,000 units sold per year, is the largest among the researched markets. Following the government's push towards reduction of air pollution, there is a significant shift in sales from coal to gas boilers. The country has a preference for large output boilers while in Western Europe BSRIA sees the opposite trend, with smaller capacity, condensing boilers gaining significance. 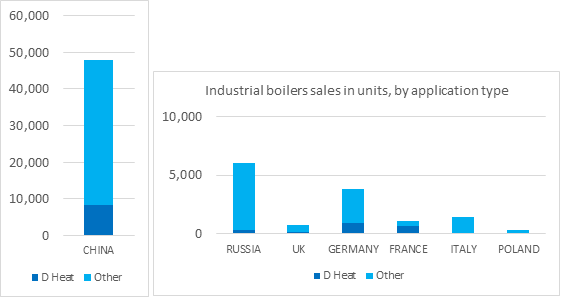 Heat networks are an important and growing segment for industrial boilers; they accounted for some 20% of all industrial boilers sold in 2018. In all seven researched countries, industrial processing in chemical, food and cement industries is also growing in prominence.

As technology progresses, the value of the industrial boiler market is growing, moreover, in all countries the service and maintenance part of the business is also growing significantly. Focus on energy efficiency supports the trend towards regular seasonal checks and more frequent upgrades.

In terms of technology, most industrial boilers sold in the researched countries are fire tube units.

This article was originally published as In industrial applications gas boilers are still important while renewables are growing slowly on the BSRIA blog on 26 March 2020. It was written by Socrates Christidis.

Retrieved from "https://www.designingbuildings.co.uk/wiki/Industrial_gas_boilers_market_2020"
Create an article