How to work safely on a construction site in the dark 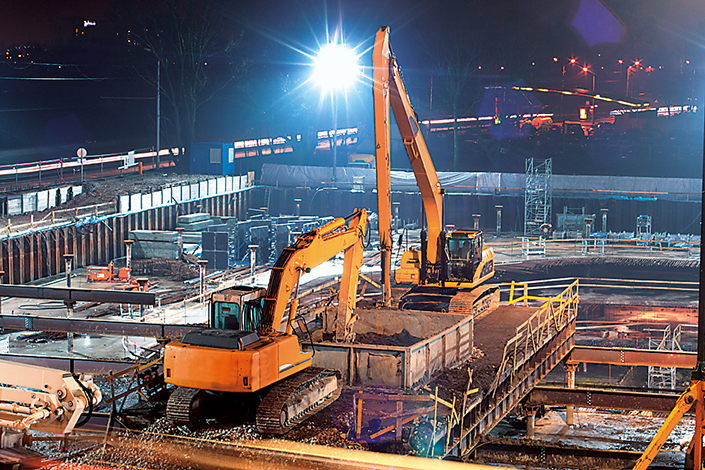 At some point within a construction worker’s career, it is likely that they will experience working in the dark.

Shift work does not necessarily need to be throughout the night in order for there to be a lack of natural light on-site. Some sites are naturally darker than others, and during the winter months, daylight hours are limited. However, for some companies, the need to meet strict deadlines will require shifts to be carried out throughout the night and for those working on a construction site to work overtime.

The practice of construction work being undertaken in the dark is relatively commonplace throughout the UK. In fact, LILUNA General President, Terence M. O’Sullivan commented, “night work has become a fact of life in highway construction.”

However, just because this practice is becoming increasingly more common, does not diminish the fundamental risks of working in the dark both associated with and independent to the construction site itself.

Working in daylight carries a range of obvious benefits; workers are generally more alert, hours are more sociable and certain risk factors are likely to be reduced. However, like night-shifts, the day-time can present with its own undesirable derivatives.

On highways and high volume roads, traffic will likely become congested as it will have to funnel through any diversions or reduced-speed areas; this is likely to cause a knock-on effect to surrounding businesses, when those travelling to work or meetings within the area arrive late.

Generally, improvements to infrastructure are designed to ease traffic congestion and generate better business for that area, therefore, working at night when there is less traffic is likely to be beneficial. The reduced traffic at night also allows for better access to the workplace. During the summer months when temperatures soar, night-shift workers benefit from cooler temperatures, allowing for longer work shifts and greater productivity.

Workers can become fatigued from a lack of light. A lack of light can impede on an employee’s vision, meaning a greater level of concentration is required in order to focus. This is especially prevalent to tasks that require attention to detail or involve an element of risk.

Working through the night can counteract the natural pattern of a person’s body clock, causing the employee to be tired, and tiredness can inhibit a person’s ability to judge a situation well. Mistakes on construction sites often bear significant financial repercussions or endanger life. It is, therefore, crucial that employees understand the importance of getting enough sleep.

Often workers feel that opting for night-shifts will give them more family time at home. However, it is essential that the same amount of hours a person would sleep in the night are slept in the day. A worker should attempt to find a place to sleep that is quiet and can block out sunlight. A routine such as this will help workers to stay alert to their surroundings and potential hazards on a night shift, minimising the likelihood of an accident occurring.

Most vehicles have some form of blind-spot in which the driver’s line of sight will be obscured or completely obstructed. Construction vehicles, in particular, are prone to this hindrance, as a large proportion of on-site motors carry equipment or are shaped in a manner that impedes upon visibility.

This is one of the reasons why many vehicles display warning signs such as ‘Warning, you may be in a blind spot’ and why other over-sized ones require pilot/escort vehicles, ensuring members of the public keep a safe distance.

Retrieved from "https://www.designingbuildings.co.uk/wiki/How_to_work_safely_on_a_construction_site_in_the_dark"
Create an article