How 5 cities are working to wipe out diabetes

By 2050, two thirds of the world’s population will be city dwellers, the result of a trend towards rapid urbanisation that presents both new opportunities and challenges.

On the one hand, people are drawn to the social and economic possibilities of an urban life, which also brings them closer to health services. On the other hand, certain aspects of city lifestyles are contributing to new and fast-moving public health challenges on an unprecedented scale. Over the next 25 years, the number of people with diabetes will be upwards of half a billion. Three in four of these people will call a city home.

The partnership aims to put urban diabetes at the top of the global healthcare agenda, and firmly in the consciousness of those designing and managing the cities of the future. We are working to provide a credible, international understanding of the problem and in turn provide a blueprint for actions that improve individual and public health.

Research led by UCL has already begun to shed light on the challenge and helps us understand what makes city dwellers vulnerable to diabetes. Findings from partner cities Mexico City, Houston, Shanghai, Tianjin and Copenhagen show, for the first time, the significant role played by social and cultural factors in diabetes risk factors.

The factors identified include time pressure, financial constraints, cultural food traditions and shifting perceptions of normal body size. Although they may manifest themselves differently, social and cultural factors are shared by cities around the world and therefore provide a basis for diabetes prevention and management strategies.

If anyone is best placed and motivated to take on board these lessons and rise to the challenge, it is the mayors of some of the world’s largest cities. They are closer to their citizens; they have a clear incentive in ensuring that their cities become more liveable and that their citizens are given the best opportunities to remain healthy and productive. Already we are seeing city leaders responding to the research findings and taking action. 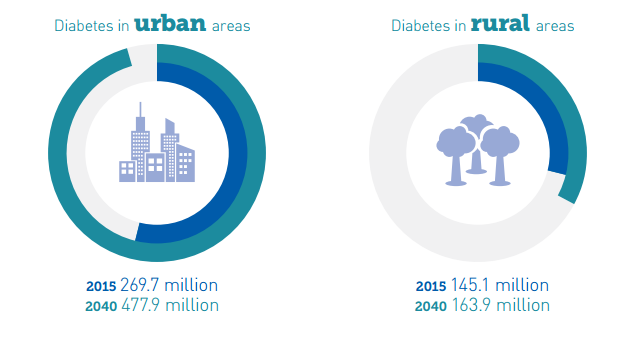 In Copenhagen, research identified hard-to-reach populations at high risk within specific districts of the city. Recognising that reaching these individuals requires a multi-sector response, the municipality has announced plans for a Copenhagen city diabetes specialist centre. The unit will provide a point of care for vulnerable individuals and will draw upon health, employment, housing and peer support resources.

In Houston, the research shattered the myth that disadvantage and diabetes vulnerability go hand-in-hand. A sizeable population of upper-middle class citizens that have never been the target of public health policies were found to be at risk. To address this and other challenges, an alliance of 70+ community and faith-based organisations, healthcare providers and employers have come together to redesign public health policies in Houston along five dimensions:

In 2016, the movement will grow, as Johannesburg and Vancouver join the programme and start work to better prevent and manage diabetes among their own populations. Whether other cities are part of the programme or simply wish to independently tackle urban diabetes, three clear principles can help them to succeed:

Cities are undoubtedly on the frontline in the fight against global diabetes and it is encouraging to see the emergence of a movement against the condition in the urban setting. Addressing this global challenge will require broader mapping of urban diabetes; continued sharing of lessons learned and collaborative local action. The road to changing diabetes will be a long one, but we will get there – one city at a time.

Retrieved from "https://www.designingbuildings.co.uk/wiki/How_5_cities_are_working_to_wipe_out_diabetes"
Create an article