The Town and Country Planning Association (TCPA) campaigns for reform of the UK’s planning system to make it more responsive to people’s needs and aspirations and to promote sustainable development.

In May 2019, TCPA introduced the Healthy Homes Bill - a campaign for legislation for the transformation of the quality of new homes in England.

This measure came in response to research the TCPA undertook with University College London (UCL), which in one case study found that, using permitted development rights, a developer had increased the number of flats in a building by 33% above what was declared within their ‘prior approval’ application. This precedent was seen as potentially leading to overcrowding while preventing the local authority from planning to meet the needs of residents. In another example, researchers discovered a two-bed flat, again built using permitted development, having only one small window.

When the Bill was introduced, Fiona Howie, chief executive of the TCPA, explained that the very worst examples of unacceptable housing, “...have come through the deregulated conversion of old office blocks and storage facilities into housing units. The creation of these cramped and substandard housing units is even more scandalous, given what we know about the impact of housing conditions on people’s health and wellbeing. Poor quality, badly designed housing damages people’s life chances.”

The announcement of the proposed Act coincided with the centenary of the Housing and Town Planning Act 1919, a key piece of legislation that helped transform the quality and delivery of council housing, giving ordinary people a decent home.

Howie said, “We have gone backwards over the last 100 years. The Healthy Homes Act will help make sure that new homes built today leave a positive legacy.”

The purpose of the proposal is to make ministers aware of proactive measures that should be taken for all new housing to meet 10 basic quality, safety and placemaking principles that collectively constitute the minimum standard for ‘decent’ homes. 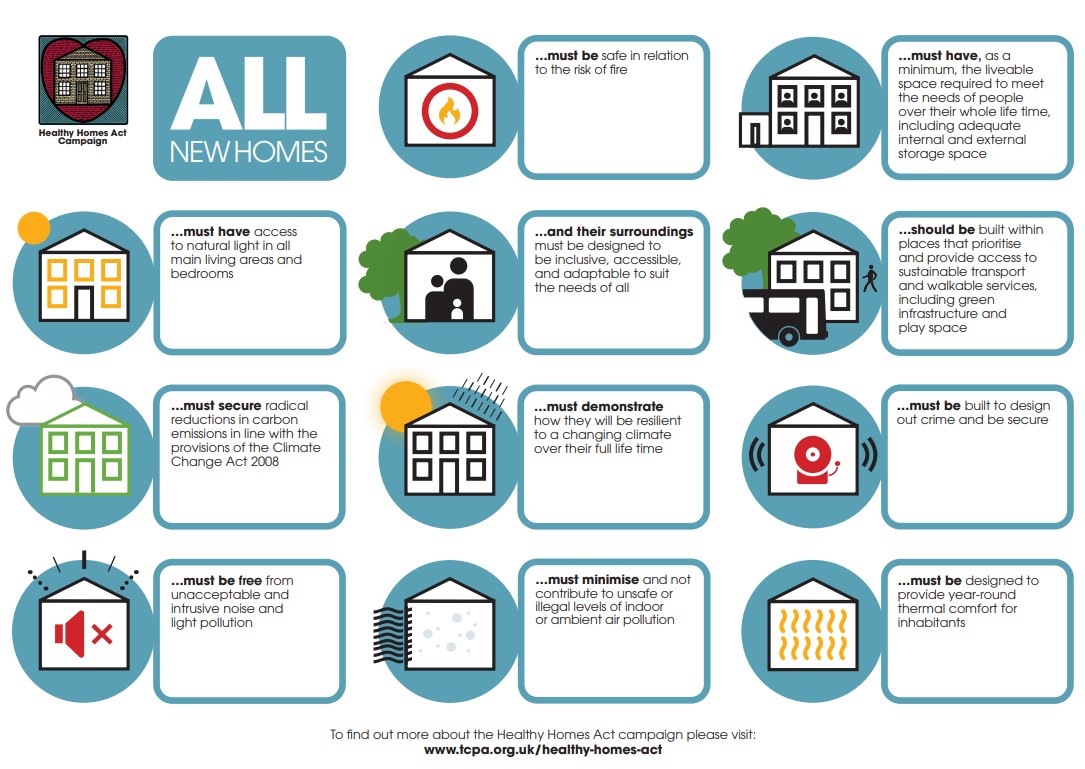 According to the 10 principles, all new homes must:

At the core of the proposal is an ongoing research project funded by the Nationwide Foundation and supported by several businesses, charities and other organisations.

Retrieved from "https://www.designingbuildings.co.uk/wiki/Healthy_Homes_Act"
Create an article