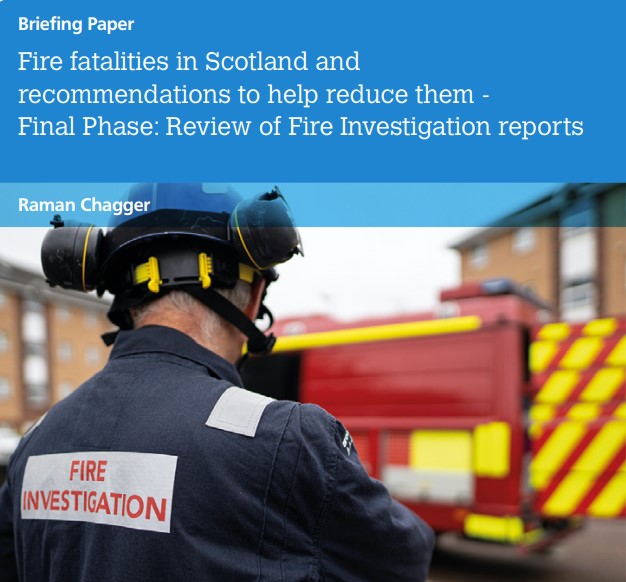 This final phase of collaborative research study investigating fire fatalities in domestic dwellings in Scotland involved a comprehensive qualitative and quantitative review of Fire Investigation reports. The reports, generated from 126 fires over a four-year period, were produced and supplied by Scottish Fire and Rescue Service (SFRS).

The findings demonstrate that whilst new and emerging technologies may provide additional protection in the future, the greater use of existing technologies could be applied immediately and would be expected to save lives. Some of these include providing inter-linked smoke alarms in bedrooms and living spaces, the greater use of the certified watermist systems and greater communication of agencies, neighbours and relatives with the SFRS when an at-risk person has been identified.

Two key areas for warranting further research were proposed which were an experimental investigation of the common electrical items involved in starting fires and a demonstration of the effectiveness of current approved suppression strategies.

The briefing paper ends with an example concept strategy intended for Fire and Rescue Services to assist with the risk classification of vulnerable individuals and proposes solutions that would provide appropriate levels of life safety protection. The findings may be of use to fire and rescue services generally to enable them to identify vulnerable people most at risk and propose interventions to protect them.

BRE Global are exploring opportunities for performing similar collaborative studies in other countries.

This article originally appeared under the headline, "Fire fatalities in Scotland and recommendations to help reduce them – Final Phase: Review of Fire Investigation reports." It was posted in December 2020.

Retrieved from "https://www.designingbuildings.co.uk/wiki/Fire_fatalities_in_Scotland"
Create an article