A chimney is a structure consisting of a wall or walls enclosing one or more flues. In the gas industry, the chimney for a gas appliance is commonly called the flue.

EMEP/EEA air pollutant emission inventory guidebook 2016 suggests that a chimney is a:

Brick, metal or concrete stack used to carry the exhaust gases into the free atmosphere and to generate draught.

A flue is a passage that conveys the products of combustion from a combustion appliance to the outside air. 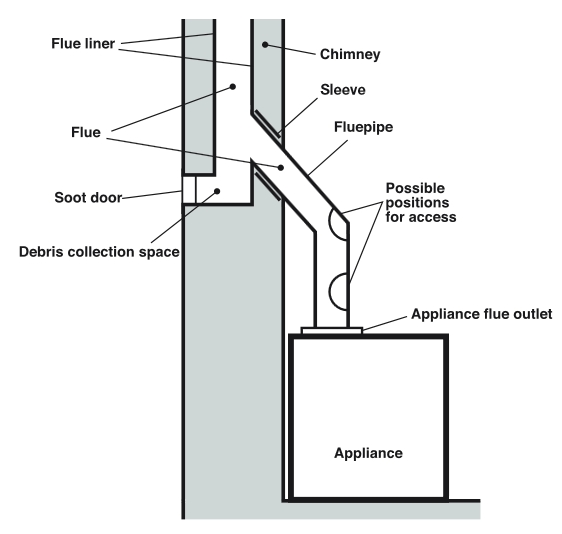 A flueblock chimney systems consist of a set of factory-made components, made from precast concrete, clay or other masonry units, that are designed for assembly on site to provide a complete chimney having the performance appropriate for the intended appliance. There are two types of common systems, one being solely for use with gas-burning appliances and the other, often called chimney block systems, being primarily designed for solid fuel-burning appliances.

NB The Scottish Building Standards, Part I. Technical Handbook – Domestic, Appendix A Defined Terms, defines a chimney as: ‘…a structure enclosing 1 or more flues, but not a flue pipe, and including any openings for the accommodation of a combustion appliance, but does not include a chimney terminal.’ It defines a chimney-stack as: ‘…that part of a chimney which rises above the roof of the building of which it forms part and includes any cope but not a chimney-can.’

Retrieved from "https://www.designingbuildings.co.uk/wiki/Chimney_definition"
Create an article