A fireplace recess is a structural opening (sometimes called a builder’s opening) formed in a wall or in a chimney breast, from which a chimney leads and which has a hearth at its base. Simple structural openings (Diagram a) are suitable for closed appliances such as stoves, cookers or boilers, but gathers (Diagram b) are necessary for accommodating open fires.

Fireplace recesses are often lined with firebacks to accommodate inset open fires (Diagram c). Lining components and decorative treatments fitted around openings reduce the opening area. It is the finished fireplace opening area which determines the size of flue required for an open fire in such a recess. 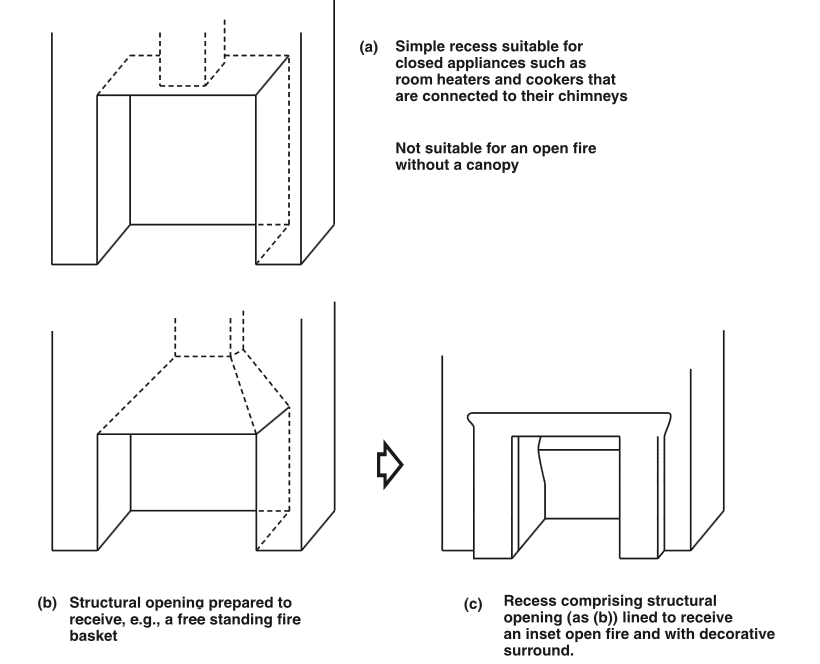 A prefabricated appliance chamber is a set of factory-made precast concrete components designed to provide a fireplace recess to accommodate an appliance such as a stove, and incorporates a gather when used with an open fire.

The chamber is normally positioned against a wall and may be designed to support a chimney. The chamber and chimney are often enclosed to create a false chimney breast.

A flue box is a factory made unit, usually made of metal, which is similar to a prefabricated appliance chamber except that it is designed to accommodate a gas burning appliance in conjunction with a factory-made chimney.

Retrieved from "https://www.designingbuildings.co.uk/wiki/Fireplace_recess"
Create an article