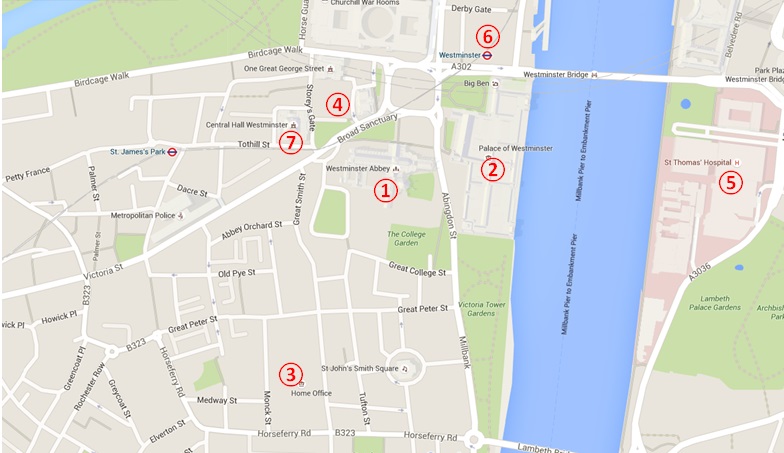 [edit] The building you can't miss

As a grandiose mausoleum for England’s historical giants, Westminster Abbey has an overpowering presence on the surrounding area. The origins of the church date back to the time of William the Conqueror, but it was Henry III in 1245 who commissioned the abbey’s reconstruction in the French Gothic style that consciously tried to ape the recently completed Rheims Cathedral. Much the same as the Houses of Parliament, the Gothic Revival front was designed in the early-18th century by Nicholas Hawksmoor.

[edit] The buildings that define the area

The Palace of Westminster is the symbolic centre of political power in the UK and one of the most recognisable and iconic buildings in the world, used to adorn everything from royal seals to sauce bottles.

Despite the building, with its golden brown turrets, spires and vanes, looking like a centuries-old sand castle, it belies a more surprising truth. The Palace, in its current ramshackle form, actually only dates back to 1870 when it was designed by Charles Barry and Augustin Pugin in a conservative Gothic Revival style. Their aim was to instil in the minds of the British people a sense of heritage and gravitas that could exude executive power as well as legitimise it, and that would reinforce a sense of history.

[edit] The buildings that break the rules

Taking a left down Great Smith Street takes you to the building of the Home Office. Constructed in 2005 and designed by Terry Farrell, with its horizontal steel battens and decorative grid pattern, the building looks rather like a giant air-conditioning unit.

Alongside, and overlooked by, Westminster Abbey is the QE2 Exhibition Centre, its modernist edifice a hectic mix of grey concrete and glass.

[edit] The buildings that get overlooked

Alongside Big Ben is the parliamentary office building Portcullis House which opened in 2001. It was designed by Michael Hopkins & Partners to represent the chained portcullis symbol of the Houses of Parliament, together with a series of mock chimneys that said to invoke the Gothic Revival of its neighbour.

Continuing away from the square along the flank the Palace, leads to Jewel Tower, three-storey crenelated stone remnant of the royal Palace of Westminster, surrounded by a long-dry moat. Used upon construction in 1365 as a stronghold for the treasure of Edward III, the tower is architecturally remarkable for its elaborate vaulting of Kentish Ragstone.

Out from the North-west corner of Parliament Square, is the grand Methodist Central Hall, built in 1912 in the Edwardian Beaux-Arts style. The building was one of the first to use a reinforced concrete frame in Britain, while the self-supporting ferro-concrete dome of the Great Hall is reputed to be the second-largest of its type in the world.

Most people who pose by the fountains and bronze lions of Trafalgar Square are oblivious to an architectural oddity on the south-east corner. This one-man sentry box was installed by Scotland Yard in 1926 and is considered to be the smallest police station in Britain. Masquerading as a lamp post, the hollowed-out granite box with narrow window slits was allegedly intended to serve as a location for police to spy on demonstrators and protesters who would regularly gather on the square. 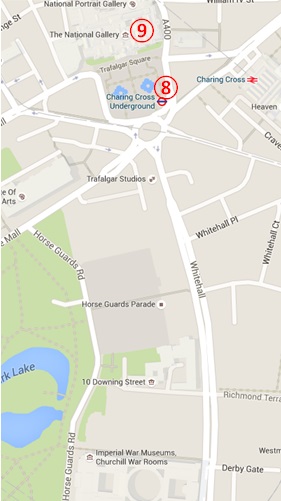 Retrieved from "https://www.designingbuildings.co.uk/wiki/Buildings_of_Westminster"
Create an article